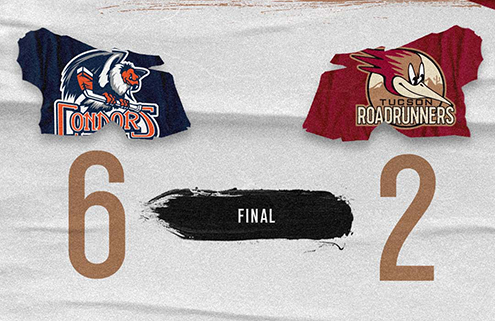 Tucson, Arizona – The Roadrunners returned to their home ice at the Tucson Arena Wednesday night as they played host to the Bakersfield Condors for the first time since January 2020. Tucson netted a power-play goal in the second period but fell to the Condors by a score of 6-2 in their first home contest since January 9. Three of the four Roadrunners that entered the night on point streaks of four games or more extended those streaks with contributions on the first goal of the game.

The Roadrunners and Condors were scoreless as they passed the midway point of the first period, but Mike Carcone opened the scoring shortly after with his tenth goal of the season which gave Tucson a 1-0 lead. The goal tied Carcone for the team lead alongside rookie forward Matias Maccelli and extended his active point streak to a career-high seven contests. The Condors answered back with 4:13 still to play in the opening frame, as a costly turnover gave Bakersfield an open look at the net to tie the game at 1-1. It looked as though the teams would be tied at the end of the period, but a late power-play goal for the Condors gave them their first lead of the night with 10 seconds on the clock. Bakersfield took that momentum into the second period, scoring a pair of goals in the first 4:48 of the middle frame to extend their lead to 4-1. Tucson got back to within two goals just under the halfway mark of the period when defenseman Cam Dineen buried the puck for a power-play goal. Dineen was in the lineup for the Roadrunners for the first time since October 24 after receiving the call-up to the Arizona Coyotes earlier this season, appearing in 14 games. The latter half of the second period was without a goal, and Tucson entered the final 20 minutes of regulation trailing by two. A pair of penalties on the Roadrunners in the early goings of the third period hindered their ability to go on the offensive attack, and Bakersfield capitalized by pushing their lead back out to 5-2 with a goal 9:23 into the final frame. Tucson sent off backup goaltender Josef Korenar in favor of an extra attacker with 5:10 still to play in the period, but an empty-net goal by the Condors put the game out of reach for the Roadrunners. Korenar entered the game after the fourth goal by Bakersfield, replacing starting netminder Ivan Prosvetov and stopping 16 of 17 shots faced.

The Roadrunners continue their three-game set at home with Bakersfield Condors Friday and Saturday night at the Tucson Arena. Both games start at 7:00 p.m. MST with coverage beginning at 6:45 on Fox Sports 1450AM with Roadrunners Warm-Up hosted by Jimmy Peebles. Then, “Voice of the Roadrunners” Adrian Denny will have all the action live from the Tucson Arena.

“I think [Bakersfield] is a good team, and you want to play good opponents. They’re well-coached, they play hard, it’s a good challenge for us. Every day when you come to the rink you need a challenge, and we have one.”

Roadrunners Head Coach Jay Varady on the challenge of facing a strong team like the Bakersfield Condors for a three-game series in the thick of a long season.

SCORING STREAKS GO ON – Entering Wednesday’s matchup with the Bakersfield Condors, the Roadrunners had four players on active point streaks of four games or more. Three of those players extended their streaks on the first goal of the evening for Tucson. Forward Mike Carcone made his way onto the stat sheet for the seventh-consecutive outing with the opening goal, while rookies Matias Maccelli and Vlad Kolyachonok extended their scoring streaks to five games by assisting on the goal.

Watch Tucson Roadrunners defenseman Cam Dineen score a power-play goal in the second period of Wednesday’s matchup with the Bakersfield Condors. The goal gave the Roadrunners their sixth power-play strike in the last five games, and a total of 13 for the month of January.

Tucson Roadrunners defenseman Cam Dineen appeared in a Roadrunners uniform for the first time since October 24 Wednesday night at the Tucson Arena. Dineen had been in the NHL with the Arizona Coyotes, where the 23-year-old tallied four points in his first 14 National Hockey League outings. Dineen scored a power-play goal in the second period against the Condors, his fourth point in five games this season with Tucson and 40th career AHL point.