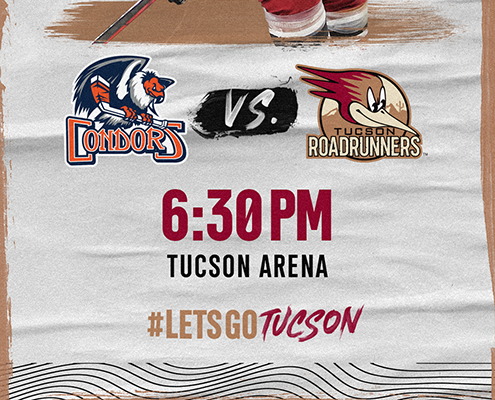 The Tucson Roadrunners return home to conclude the month of January with a three-game series against the Bakersfield Condors. Wednesday’s game will mark the first time Tucson has hosted the Condors since January 25, 2020. Three players from that night’s Roadrunners roster remain with the team (Ivan Prosvetov, Hudson Fasching, Blake Speers), while current Tucson forward Cameron Hebig was on the other bench as a member of the Condors.

Three Things
1) The Roadrunners return home after a two-week, six-game road trip that saw them face the Bakersfield Condors on Wednesday, January 19, for the first time since March 2020. In the game, top performers Mike Carcone and Vlad Kolyachonok returned to the lineup for their first games of the trip, with both players recording a point. Tucson had a power-play strike from Carcone, along with even-strength scores from Travis Barron and Cole Hults. Forwards Max Coatta and Stephen Harper each tallied their first points as members of the Roadrunners, with the pair assisting on Hults’ goal in the second period.

2) A key contributor to the Roadrunners offense over their six-game road trip was the effectiveness of their power-play unit. Tucson netted a total of seven power-play goals on the trip, including three goals while on the man-advantage Sunday afternoon against the Ontario Reign. The proficiency of the Roadrunners power-play unit dates back to the team’s four-game home stand from January 4-9 against Stockton and Colorado, with Tucson tallying five goals over four contests on 18 trips to the man-advantage.

3) Tucson enters the series against Bakersfield with a total of five skaters on a point streak of three games or more. Leading the way is Mike Carcone with a point in each of his last six outings, followed by Jan Jenik, Matias Maccelli, and Vlad Kolyachonok with four-game streaks. Travis Barron rounds out the list with a point in his last three contests. Barron and Carcone netted goals in the first meeting between the Roadrunners and Condors a week ago, while Maccelli, Kolyachonok, and Jenik each tallied an assist.

What’s The Word?
Roadrunners forward Ben McCartney on focusing on fine-tuning his offensive game entering the three-game series with the Bakersfield Condors:

“At the end of the day, hockey is all about details. It’s hard to stay on track for a full 60 minutes, but it’s what you have to do to win hockey games.”

Number to Know
1 – The number of power-play goals allowed by the Roadrunners over their last four-game home stand at the Tucson Arena January 4-9 against the Stockton Heat and Colorado Eagles. Tucson fended off 16 of 17 total opposing power-plays, good for a 94.1 penalty-kill percentage (PK%).

We’re Doing It Live
Today’s game will be broadcast on AHLtv, as well as on the radio on Fox Sports 1450AM, or on the iHeartRadio app. Coverage begins at 6:15 p.m. MST with Roadrunners Warm-Up, as Jimmy Peebles gets you ready for the game before “Voice of the Roadrunners” Adrian Denny has the call at 6:30 p.m. live from Tucson Arena.