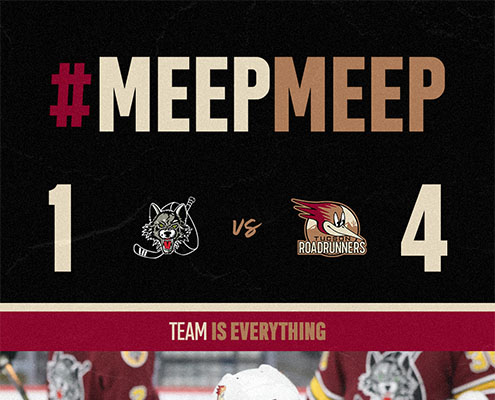 Tucson, Arizona – The Tucson Roadrunners defeated the Chicago Wolves 4-1 on Wednesday to secure a two-game sweep over the defending Calder Cup Champions, as well as their third win in their last four outings from the Tucson Arena. Four different Roadrunners lit the lamp in the win, while linemates Mike Carcone (2a) and Adam Cracknell (1g 1a) notched multiple-point performances. Goaltender Ivan Prosvetov stopped 21 of 22 shots faced for Tucson to earn his 11th win of the season.

Roadrunners Forward Hudson Elynuik gave Tucson a multi-goal lead in the first period of Wednesday’s eventual 4-1 win over the visiting Chicago Wolves, as he converted a shot from a tough angle for his fourth goal of the season. Elynuik (1g) and his linemates Mike Carcone (2a) and Adam Cracknell (1g 1a) combined for two of the Roadrunners four goals scored, as well as five of their nine total points.

PUCKS TO THE NET – Tucson tallied 40 total shots on goal in Wednesday’s win over the Wolves, including 20 in the first period alone. Their 40 shots on Chicago backstop Zachary Sawchenko were the most in a game by the Roadrunners since they recorded 47 total shots on December 10 against the Ontario Reign. In addition, Wednesday’s opening frame featured the most shots in a single period for Tucson since they fired off 23 in the second period of the same December 10 matchup with Ontario. Forward Hudson Elynuik and defenseman Cam Dineen were tied for the team lead Wednesday with five shots on goal apiece, as 14 different Roadrunners officially sent a puck toward Sawchenko.

Forward Mike Carcone notched his 16th multiple-point performance of the season on Wednesday with a pair of assists in Tucson’s 4-1 win over the Chicago Wolves. The outing extended Carcone’s active scoring streak to 12 games, with 23 total points (10g 13a) during that span for the 2023 AHL All-Star. With 54 points (21g 33a) in just 34 games played, Carcone is 13 points shy of the Roadrunners all-time franchise record for points in a single season at 67. The current mark was set in Tucson’s inaugural 2016-2017 season by forward Chris Mueller and represented third place in scoring in the entire American Hockey League that season.

“Our game plan was to come in here and get two wins over Chicago, and I’m happy we did. We were off to a good start [Wednesday] and were able to maintain that through the entire game.”

Roadrunners forward Boko Imama on the two-game series sweep over the Chicago Wolves. Imama opened the scoring in the first period on Wednesday with his third tally of the season.

After the opening 36:36 of Tuesday’s series opener was without a goal, the Roadrunners got the scoring started much earlier on Wednesday with a first-period goal by Boko Imama. Imama redirected a backdoor pass from defenseman Devante Stephens for his third goal of the season and a 1-0 lead 7:34 into the contest. Tucson kept it going with just over seven minutes remaining in the period, as Hudson Elynuik took a feed from Mike Carcone and buried it up high to extend the early lead to 2-0. With the primary assist, Carcone extended his franchise-record active scoring streak to 12 games and his league lead in total scoring to 53 points (21g 32a). The AHL All-Star set up another tally for Tucson with 2:49 to play in the opening frame, as Laurent Dauphin deflected a shot from Carcone into the back of the net for the Roadrunners first power-play goal of the two-game series. Dauphin’s 16th score of the season capped off Tucson’s second-straight multi-goal period and fourth in as many games, sending the Roadrunners to the first intermission up 3-0 while outshooting Chicago 20 to six. The Wolves got on the board with the first goal of the second period, scored with 5:28 gone by in the frame to reduce Tucson’s lead to 3-1. The goal was Chicago’s first five-on-five goal of the midweek series, as their only tally on Tuesday was scored on the man-advantage. Chicago’s early score marked the only offense of the second period, with the Roadrunners still up by a pair entering the final 20 minutes of play. Wednesday’s third period began with a fight between Roadrunners forward Mike Carcone and Chicago’s Max Lajoie, which represented Carcone’s third time dropping the gloves this year. Still leading 3-1 late in the contest, Tucson faced an extra-attacker situation when the Wolves pulled netminder Zachary Sawchenko with 4:16 remaining in regulation. An empty-net goal by Roadrunners Captain Adam Cracknell put an end to Chicago’s comeback attempt with 2:09 left on the clock, as Tucson came away with a 4-1 victory for their third win in four games on their current home stand.