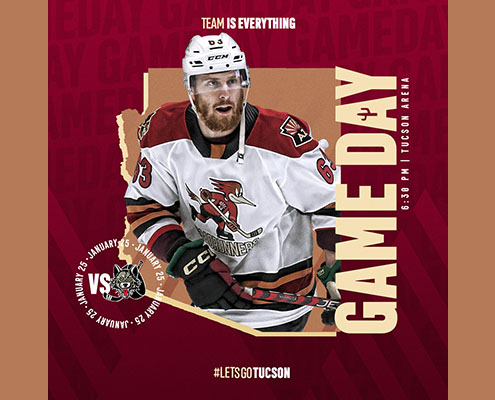 The Roadrunners wrap up their two-game midweek set with the Chicago Wolves Wednesday night at the Tucson Arena. Tucson has a chance to sweep the defending Calder Cup Champions after winning the series opener 5-1 on Tuesday night. A win Wednesday would be the Roadrunners third in four games to start their current six-game home stand, as well as their fourth in seven games since a third-period comeback and 4-3 shootout win in Bakersfield on January 14. The series finale also represents the second to last Kids Free Wednesday of the season, as all kids 12 and under can receive a free ticket to the game with a paying adult at the Tucson Arena Box Office.

Three Things
1) The Roadrunners took the series opener Tuesday night by a final score of 5-1, fueled by a four-goal third period for Tucson. The offensive output marked the fourth time this season that the Roadrunners have netted at least four goals in a single period, and the first time since their six-goal opening frame in San Diego on December 17. Through the three games on their current home stand, the Roadrunners have outscored their opponents 13 to six, with three periods featuring three or more goals scored. Tucson enters the rematch with Chicago on a three-game winning streak against the Wolves dating back to a pair of wins in Chicago on March 5 and 7 of 2020. Following Wednesday’s series finale, the Roadrunners and Wolves will meet two more times this year from the Allstate Arena in Chicago for a two-game set February 25 and 26.

2) Tuesday’s matchup between Tucson and Chicago was tied at 0-0 for the opening 36 minutes and 36 seconds of the contest, which represents the longest scoreless tie between the Roadrunners and their opponent to start a game this year. The stalemate was eventually broken by Tucson forward Cam Hebig with 3:24 remaining in the middle frame, surpassing the previous mark by over nine minutes. The Roadrunners and goaltender Tyler Parks continued to hold Chicago scoreless for the opening 51:08 of regulation before a deflected power-play goal gave the Wolves their only tally of the night. Parks stopped 27 of 28 shots faced for his second-straight win since being recalled by the Roadrunners from the ECHL’s Atlanta Gladiators on January 20. With the win, Tucson improved to 7-3-1-0 on the season when not allowing a first-period score by their opponent.

3) Forward Mike Carcone was back in the Tucson lineup on Tuesday for his first game with the Roadrunners since January 18. Carcone scored the first of four third-period Tucson goals for his team-leading 21st time lighting the lamp this season.  The goal extended the 26-year-old’s active scoring streak to 11 consecutive games with a point dating back to a four-point performance on December 17. Carcone’s streak set a new Tucson franchise record when it reached ten-straight games on January 18 and has remained in progress between two separate call-ups to the NHL Coyotes. Carcone has remained atop the American Hockey League in total points since his first NHL call-up of the season on December 27 and enters Wednesday with a four-point lead over the rest of the league despite six fewer games than his closest competitor. In his third year with the Roadrunners, Carcone is one of four players to be recalled by the Coyotes on the year after Milos Kelemen made his National Hockey League debut on Tuesday against the Anaheim Ducks. Through nine NHL outings with Arizona this season, Carcone has two goals and an assist as a plus-three, which is tied with defenseman Jakob Chychrun for second on the team.

“I think we have to take advantage of our home stand. We have the fans on our side, and it’s our home ice. We have to make the most of this and get some wins here.”

Roadrunners forward Cam Hebig on the importance of Tucson’s current six-game home stand. Hebig tallied his first multi-goal performance of the season on Tuesday with the first and last goals scored in the contest.

Number to Know
77 – The number of shots on goal recorded by the Roadrunners over their last two games, the second most in back-to-back outings this season. Tucson increased their shot total in all three periods on Tuesday (12, 13, 14), while Chicago’s shots decreased in all three periods (12, 9, 7). 15 different Roadrunners players recorded a shot on goal Tuesday with 39 total shots on Wolves netminder Pyotr Kochetkov, their most in a game since December 9 against Ontario. Forwards J.S. Dea, Cam Hebig, Laurent Dauphin and Colin Theisen led the way for Tucson with four shots apiece.

We’re Doing It Live
Tonight’s game will be broadcast live on AHLtv, as well as on the radio at FOX Sports 1450AM and the iHeartRadio app. Coverage begins at 6:15 p.m. with Roadrunners Warm-Up hosted by Jimmy Peebles, before “Voice of the Roadrunners” Adrian Denny has all the action from the Tucson Arena.