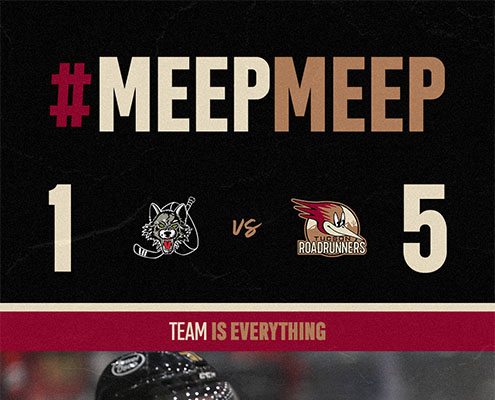 Tucson, Arizona – The Tucson Roadrunners defeated the reigning Calder Cup Champion Chicago Wolves Tuesday by a final score of 5-1 at the Tucson Arena. Forward Cam Hebig broke a scoreless tie late in the middle frame before he capped off Tucson’s four-goal third period for his first multi-goal outing of the season. On the other end, Roadrunners netminder Tyler Parks earned his second consecutive victory since his season debut for Tucson on Friday, January 20, as he stopped 27 of 28 shots faced. The Roadrunners and Wolves will wrap up the two-game midweek set on Wednesday, which represents Chicago’s final contest in Tucson this year.

Roadrunners Forward Cam Hebig scored both the first and last goals of Tuesday’s 5-1 win over the Chicago Wolves, for the 25-year-old’s first multi-goal performance of the season. Hebig broke a 0-0 tie late in the second period with his third goal of the year and scored Tucson’s fourth and final goal of the third period for his fourth time lighting the lamp. Hebig was one of two players to tally multiple points in the win along with Roadrunners defenseman Ronald Knot (2a).

CARCONE’S ELEVEN – The AHL’s leading scorer returned to the Roadrunners lineup for Tuesday’s series opener with the Chicago Wolves, as the Arizona Coyotes assigned forward Mike Carcone to Tucson on Monday. The 26-year-old picked up right where he left off for the Roadrunners, as he opened the third-period scoring with his 21st goal of the season. With the goal, Carcone further extended his active scoring streak to 11 games, which is already a Tucson franchise record. Carcone leads the American Hockey League in total scoring with 21 goals, 31 assists and 52 total points in just 33 games played on the year.

With his performance on Tuesday against the Chicago Wolves, Roadrunners goaltender Tyler Parks earned his second-straight win since joining Tucson at the start of their current home stand. Parks stopped 27 of 28 shots faced for the best save percentage in a start in his AHL career at .964. The 30-year-old kept the Wolves off of the board for the opening 51:08 of the contest before a redirected power-play goal slipped through to end the scoreless streak.

“We got some big saves from [Tyler Parks] early on that gave us some confidence, and it kept going throughout the game. I was pleased with our commitment to each other, and the guys were persistent in their game. They didn’t stop no matter what the score was. That was a well-played, group effort.”

The Roadrunners and visiting Chicago Wolves opened the two-game series by shooting the puck early and often, as a combined 18 different players recorded a shot on goal through the first period of play. Despite each team tallying 12 shots in the opening frame, Tuesday marked just the fourth time this year where Tucson and their opponent were scoreless after 20 minutes of action. The Roadrunners and Wolves began the middle period with the same aggressiveness on offense as they had in the first, but goaltenders Tyler Parks for Tucson and Pyotr Kochetkov for Chicago were once again able to keep the game scoreless for most of the frame. With 3:24 left in the second period, forward Cam Hebig broke the scoreless tie with his third goal of the season to give the Roadrunners a 1-0 advantage entering the final 20 minutes of play. The goal 36:36 into Tuesday’s contest marked the latest score to open a game for Tucson or their opponent this season, topping the previous mark by just over nine minutes. Still holding onto their one-goal lead, the Roadrunners added a pair of goals in the span of 44 seconds to make it a 3-0 game in their favor. The first goal was scored by Mike Carcone in his first game since returning from the Arizona Coyotes, as he extended his franchise-record scoring streak to eleven games. Forward Ryan McGregor quickly followed up Carcone by lighting the lamp for the sixth time this season with 8:09 gone by in the period. Chicago got on the board just under three minutes later, with a power-play goal to cut the Roadrunners advantage to 3-1. Tucson answered back less than a minute later when Laurent Dauphin lit the lamp for the second-straight game, extending his overall scoring streak to three games and the Roadrunners lead to 4-1 with his 15th tally of the year. With 2:49 remaining in regulation, Cam Hebig netted his second goal of the night to secure a four-goal third period and a 5-1 victory for Tucson in the series opener.