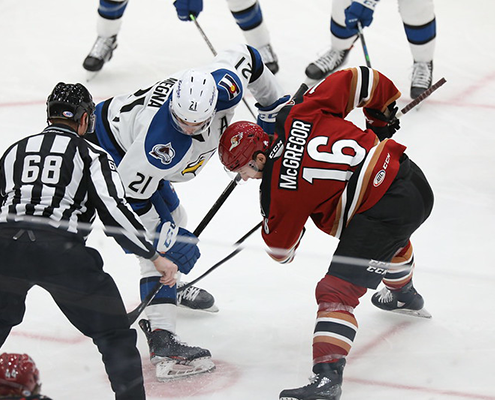 Tucson, Arizona – The Tucson Roadrunners welcomed the Colorado Eagles back to the Tucson Arena for the first time February 1, 2020 Thursday night. Tucson set an AHL season high for shots on goal with 53, breaking their previous mark of 52 shots. Ivan Prosvetov and Barrett Hayton made their returns to the Tucson Arena ice, and Ty Emberson made his home debut for the Roadrunners.

The Tucson Roadrunners opened the scoring thanks to a goal by Victor Soderstrom, his second of the season and second against the Colorado Eagles. The Eagles answered back quickly with a goal of their own 25 seconds later, when Nick Henry slipped the puck past Ivan Prosvetov for his third score of the year. Tucson had a handful of scoring opportunities throughout the first, including the first power-play of the night, but the score remained tied at one at the conclusion of the first period. Colorado took their first lead of the night on their first power-play, scoring less than ten seconds into the man advantage to pull ahead by a score of 2-1 just 5:24 into the period. Tucson continued their barrage of shots in the second period but couldn’t get the puck past former Roadrunner Hunter Miska. Colorado added an insurance goal late in the third period to put the Eagles up 3-1 with time winding down. Barrett Hayton, back in the lineup after missing time due to an injury, scored late for the Roadrunners to bring them back to within one. An empty-net goal sealed the win for the Eagles, with a final score of 4-2. Tucson outshot the Eagles in every period, with the final totals resting at 53-30 in the Roadrunners favor.

The Roadrunners will look to take the second game of the series against Colorado Friday night at 7:00 p.m. MST. You can listen to the game in Tucson on FOX Sports 1450 AM and on the iHeart Radio app or watch the game on AHL TV.

“We were happy with our structure tonight, I thought we did well in the defensive zone, we prevented a lot of inside shots, and our structure led to a lot of shot opportunities. Every night our guys find every little ounce of compete in them that they need to bring out. I can never fault their effort; they always pay attention to the details.”

Tucson Roadrunners Head Coach Steve Potvin after the game on the team’s effort in a close loss to the Colorado Eagles Thursday night.

DON’T OVERLOOK IT
BURKE LENDS A HAND – Tucson Roadrunners forward Brayden Burke picked up his tenth assist of the season Thursday night against the Colorado Eagles. Burke picked up the assist on Barrett Hayton’s goal with eight seconds left on the clock in the third period. Burke now has three assists in the last five games and four points in the month of April.

Watch Tucson Roadrunners defenseman Victor Soderstrom snipe the puck past Eagles goaltender Hunter Miska from the face-off circle to get Tucson on the board first in Thursday night’s contest. Soderstrom has two goals on the season, both of which were scored against the Colorado Eagles.

The Tucson Roadrunners wore a special helmet sticker to honor Leighton Accardo Thursday night against the Colorado Eagles, and will continue to for the remainder of the season. Accardo, who was beloved by the Coyotes organization, passed away on November 24, 2020 after a courageous battle with cancer. She was inducted into the Arizona Coyotes Ring of Honor on Saturday, April 17 becoming the first former individual who is not player, coach, general manager, or broadcaster, to be inducted into a team’s Ring of Honor in Arizona and the entire NHL.