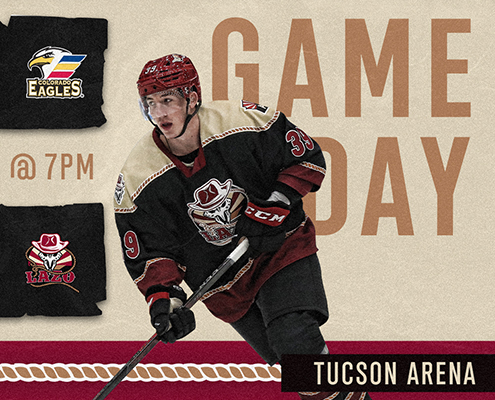 The Tucson Roadrunners continue their three-game home series with the Colorado Eagles Friday night, for their second El Lazo de Tucson Night of the season. The Roadrunners set an AHL season high for shots on goal Thursday night with 53 but fell to the Eagles 4-2. The Roadrunners will be looking to capitalize off of last game’s positives to come away with two points.

Three Things
1) Some notable Roadrunners players made their returns to the Tucson Arena ice Thursday night against the Colorado Eagles. Ivan Prosvetov started in net for the Roadrunners in his first home game since March 21, stopping 26 shots, including several key chances for the Eagles. On the other end of the ice, Barrett Hayton returned to the lineup for the first time since April 2 due to injury, showing everyone that he was back to full strength with a goal in the final seconds of Thursday’s game. The goal was Hayton’s first since March 31, but second in his last three games played. Meanwhile, defenseman Ty Emberson made his home debut with the Roadrunners Thursday, marking his second appearance with Tucson on the season.

3) Friday night marks the second of three “El Lazo de Tucson” games for the Tucson Roadrunners this season. The team will once again don their special El Lazo jerseys, and Dusty will take on his alter-ego of “El Polvo” when the Roadrunners and Eagles face-off at 7:00 p.m. MST on Friday. Joining in the festivities will be the “Los Diablitos de Sunnyside High School” mariachi band and the ballet folklorico. After Friday, the team will have one final El Lazo de Tucson night May 14 against the Ontario Reign.

What’s The Word?
Tucson Roadrunners forward Barrett Hayton on scoring a goal in his first game back in the lineup since April 2 due to injury:

“I feel like I’d been playing some good hockey prior to getting hurt and scoring in my first night back is definitely nice. I think I have a great opportunity down here, working with these guys, getting minutes and being put in situations I eventually want to be in with the Arizona Coyotes.”