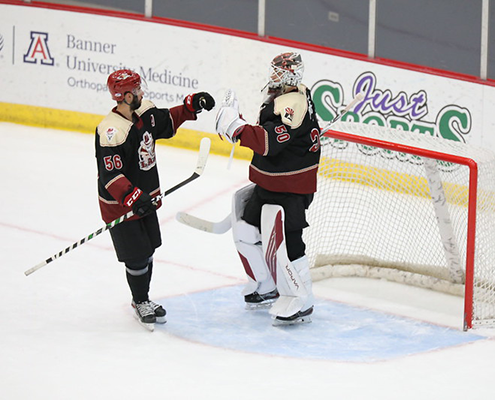 Tucson, Arizona – During the first intermission of Friday night’s matchup with the Colorado Eagles, Tucson Roadrunners defenseman Dysin Mayo said that the Eagles “came out with a lot of speed” in the first period, and that the Roadrunners needed to “take it over in the next two.” That’s exactly what they did, tallying two goals in the second period and preventing the Eagles from scoring a goal of their own for the last 30:40 of regulation to earn Tucson a 3-2 win.

The Roadrunners scored first in their third-straight contest Friday night, when Nate Sucese slipped past the Colorado defense to put the puck in the back of the net. The Eagles once again answered back, when Jean-Luc Foudy picked up a loose puck near center ice and put it in the back of the net. Tucson once again outshot Colorado in the first period, but only by the slimmest of margins, as they led the category 11-10. The Roadrunners wasted no time retaking the lead in the second period, when Tyler Steenbergen buried a beauty of a shot into the back of the back of the net, making the score 2-1. The goal marks the seventh out of the last eight games where Steenbergen has recorded a point. The Eagles once again tied up the game midway through the period, when they cashed in on their first power-play of the night to make the score 2-2. With less than five minutes to play in the second period, Mike Carcone got the Roadrunners back on top with his team-leading 12th goal of the season. The score would remain at 3-2 as the teams headed into the second intermission. The only thing separating the Roadrunners and a victory was twenty minutes of action. The final period featured three penalties, 18 combined shots, and zero goals as the Roadrunners held on to win 3-2. Michael Carcone wound up with the game-winning goal, and Ivan Prosvetov finished the night with 33 saves and his seventh win of the season.

The Roadrunners wrap up both the weekend series and their overall season series with the Colorado Eagles in Sunday afternoon rubber match at 1:00 p.m. MST. The game will be televised live on The CW Tucson, where “Voice of the Roadrunners” Adrian Denny and Alex Kinkopf of ArizonaCoyotes.com will have the call. You can also listen to the game in Tucson on FOX Sports 1450 AM and on the iHeart Radio app or watch the game on AHL TV.

“It’s fun to win these types of games. We had some lapses and breakdowns, but we stayed strong. Our guys competed right to the end and it’s nice to see them seal and close out a one-goal hockey game.”

Tucson Roadrunners Head Coach Steve Potvin after the game on the team’s performance in a close 3-2 win over the Colorado Eagles Friday night.

DON’T OVERLOOK IT
A TRIO OF TOP SCORERS – Three of the Tucson Roadrunners top four active goal scorers lit the lamp in Friday night’s contest with the Colorado Eagles. Nate Sucese put the Roadrunners on the board with his sixth goal of the season in the first period. Then in the second period, Tyler Steenbergen tallied his seventh of the year, followed by Mike Carcone’s team-leading twelfth goal of the 2021 AHL campaign. The trio have combined for nearly a third of the team’s overall scoring this season and are showing no signs of stopping.

Watch Tucson Roadrunners forward Mike Carcone find the back of the net on this goal with five minutes left to play in the second period Friday night against the Colorado Eagles. Carcone’s team-leading twelfth goal of the season gave the Roadrunners a 3-2 lead and ended up as the game winner over Colorado.

The Tucson Roadrunners once again took on their “El Lazo de Tucson” identity Friday night against the Colorado Eagles. Friday featured a bilingual in-game presentation, Mariachi de los Diablitos de Sunnyside High School for the National Anthem, and Dusty’s alter-ego of “El Polvo.” The team wore their special El Lazo uniforms and will do so one more time when they host the Ontario Reign Friday, May 14.