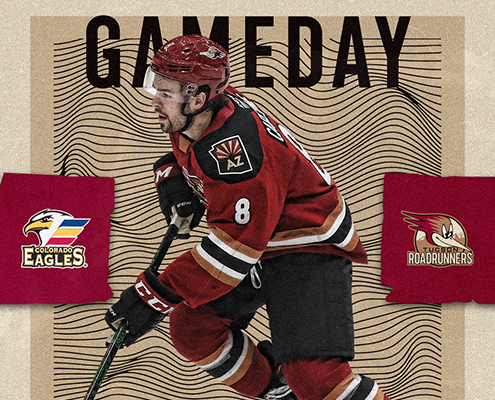 The Tucson Roadrunners conclude their season series with the Colorado Eagles Sunday afternoon at the Tucson Arena, at 1:00 p.m. MST. The game will be televised live on The CW Tucson, where “Voice of the Roadrunners” Adrian Denny, along with Alex Kinkopf of ArizonaCoyotes.com will have the call. Tucson will be looking to take two out of three games with the Eagles this weekend a win, after they held on for a 3-2 victory Friday night.

Three Things
1) Tucson Roadrunners forward Tyler Steenbergen continued his impressive scoring run Friday night against Colorado. After giving Tucson a 2-1 lead in the second period, Steenbergen now has recorded a point in seven of the Roadunners last eight games. Among active members of the Tucson roster, Steenbergen has the third-most goals and is fourth in total points. Steenbergen has two game-winning goals during the month of April, with one in the Roadrunners last game to take place on a Sunday, and his other coming from Tucson’s last televised game. Both of which point to Steenbergen being a player to keep an eye on when the Roadrunners are broadcast live on The CW Tucson Sunday afternoon.

2) Tucson’s leading goal scorer for the month of April, Michael Carcone, added to his total Friday night when he netted the eventual game-winning goal for the Roadrunners against the Colorado Eagles. Carcone has eight goals in the team’s last seven games, including two game-winners, tied with Tyler Steenbergen for most in the last month. Carcone has recorded points in five of the last seven games, including six goals in two games against the San Diego Gulls April 9 and 10, which earned him AHL Player of the Week honors for the first time in his career.

“It’s a good league, it’s a tough league to play in, there’s a lot of good players and teams. Our coaching staff has been doing a great job, as you can see with [Michael Bunting] and [Lane Pederson] up in Arizona. When I first came [to Tucson] at the beginning of the season, I started off pretty slow. After that, I’ve stepped up every game and I feel like I’ve been playing at the top of my game and I feel like I’ve been getting better every game.”

Number to Know
3 – The number of consecutive televised games the Tucson Roadrunners have won this season. Out of their four games to be shown on The CW Tucson so far this season, the Roadrunners have won each of their last three, outscoring their opponents 14-5. The previous two televised games have had a player score two goals, including the game-winner (Tyler Steenbergen April 3 versus Henderson and Michael Carcone April 10 versus San Diego). The Roadrunners will look to continue this streak Sunday when they take on the Colorado Eagles.

We’re Doing It Live
Roadrunners Hockey returns to the radio today at 1:00 p.m. as “Voice of the Roadrunners” Adrian Denny brings you all of the action on Fox Sports 1450 AM. In addition to the usual radio broadcast, Sunday’s game will be televised live in Southern Arizona on The CW Tucson. All Roadrunners games are broadcast live on Tucson’s Sports Station, along with AHLtv.