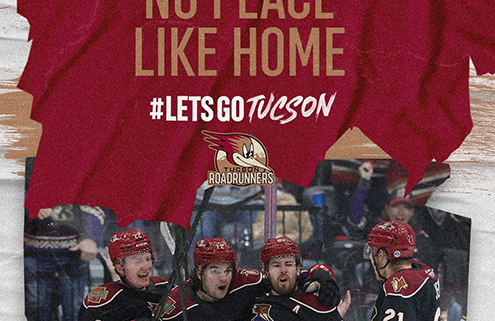 Tucson, Arizona – The Tucson Roadrunners returned home to kick off a four-game home stand Saturday night, as they hosted the Henderson Silver Knights for the first of two weekend matchups at the Tucson Arena. 5,502 fans, the largest crowd since November 9, 2019 witnessed a back-and-forth battle that saw the Roadrunners come away with a 4-3 victory in the final seconds of regulation. Mike Carcone netted the game winning goal with 15 seconds left to play, becoming the fourth Roadrunner on the night to record a multiple-point performance. On the other end, goaltender Ivan Prosvetov earned his second-straight win at home as he stopped 23 shots.

The Silver Knights struck first with a goal 2:31 into the opening period, creating a lead they’d hold for 22 minutes and 29 seconds. Tucson had a key opportunity to even up the score just past the five-minute mark of the frame with a major power-play. Henderson’s Reid Duke was called for boarding after a hard hit on Vlad Kolyachonok behind the Roadrunners net. Carcone had a seemingly open look at the net early in the man-advantage, but goaltender Dylan Ferguson stuck his glove out at the last moment to make the save. Tucson shut down a Henderson power-play with 6:15 left in the period to keep the deficit at one entering the second period. After the opening goal of the first period came just 2:31 into the frame, it took nearly twice as long for the horn to sound in the middle frame. Doyle Somerby rifled a shot in from the point that was deflected by Ben McCartney and Jan Jenik for Jenik’s 12th goal of the season, evening the score at 1-1 exactly five minutes into the period. Tucson took the momentum created by the equalizer goal and used it to add another 3:43 later to take their first lead of the contest. Matias Maccelli took a pass from Mike Carcone deep in the Henderson zone for his 12th time lighting the lamp this year. Doyle Somerby tallied his second assist of the night on the goal, giving the defenseman his first multiple-point performance of the season. With 18 seconds remaining in the middle period, Henderson evened the score up at two with their first goal in 47:11. The Roadrunners and Silver Knights entered the final frame of regulation entrenched in another close matchup, with five of their ten previous all-time matchups being decided by just one goal. Henderson retook the lead at 3-2 early in the third period with a power-play strike 4:15 into the frame. With that goal, each period of Saturday night’s contest had a score within the first five minutes of play. Tucson answered back with a power-play goal of their own 3:40 later, tying the game back up at 3-3. Jan Jenik scored the goal for his second of the night and team-leading eighth of the season while on the man-advantage. Another tight battle between the Roadrunners and Silver Knights came down to the final 15 seconds, when Tucson forward Mike Carcone buried the game-winning goal on the power-play.

The Roadrunners will look for a sweep against the Silver Knights Sunday afternoon as they wrap up Kids Weekend at the Tucson Arena. Sunday’s series finale starts at 4:00 p.m. MST with coverage beginning at 3:45 on Fox Sports 1450AM with Roadrunners Warm-Up hosted by Jimmy Peebles. Then, “Voice of the Roadrunners” Adrian Denny will have all the action live from the Tucson Arena.

“It was electric in here. It’s always great to see so many people come out. A lot of stuff going on tonight in Tucson, [University of Arizona] is playing. To have two big crowds in the city is exciting, it’s nice to see people back out. Boko had his t-shirts, I think that was a great event for a night like tonight.”

Roadrunners Head Coach Jay Varady on the atmosphere created by the 5,502 fans in attendance Saturday night, the largest crowd since November 9, 2019.

POWER-PLAY KEEPS PRODUCING – Tucson’s final two goals in Saturday’s 4-3 win over the Silver Knights were scored while on the man-advantage. The first came from Jan Jenik with his team-leading eighth power-play strike 7:55 into the third period to tie the game at three. With time winding down in regulation, forward Mike Carcone cashed in on special-teams for the eventual game-winner. The Roadrunners were previously 0-for-20 on the power-play against the Silver Knights, before scoring on two of their last three trips in the third period to come away with a win.

Watch Tucson forward Mike Carcone score the game-winning goal with 15 seconds left in regulation, giving the Roadrunners their second-straight comeback win at the Tucson Arena. The goal marked Carcone’s team-leading 18th of the season and helped give the 25-year-old his fourth multi-point performance in his last seven outings.