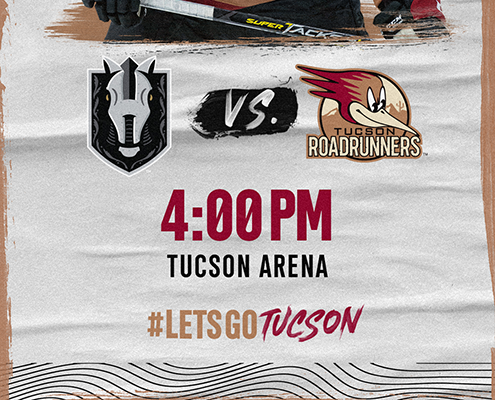 The Tucson Roadrunners will look for a sweep against the Henderson Silver Knights Sunday afternoon at the Tucson Arena. The Roadrunners took the series opener Saturday with a 4-3 come-from-behind victory, their second-straight comeback win at the Tucson Arena. Kids Weekend continues with Sunday’s contest, as all fans 12 and under can attend the game for free with a paying adult. Kids can also receive free hockey-themed educational workbooks, and snack on $6 Kids Meals as they cheer on the Roadrunners.

Three Things
1) Tucson took the first game of the weekend with Henderson in dramatic fashion, coming back from down 3-2 in the third period to take a 4-3 lead with 15 seconds left in regulation on a goal by Mike Carcone, his team-leading 18th of the season. The win marked the fifth-consecutive home win for Tucson where they scored the game-winning goal in the third period or later. The game was another close battle with Henderson, as six of the Roadrunners 11 all-time matchups with the Silver Knights have been decided by just one goal, including three of the five meetings this season.

2) The Roadrunners power-play continued to be a difference maker in Saturday’s win, as Tucson’s final two goals in the third period were scored while on the man-advantage. Power-play strikes have come in bunches for the skilled unit, as seven of the last 14 games with a power-play goal have seen Tucson add a second. Each of the Roadrunners special-teams scores on Saturday came back-to-back in the third period by Jan Jenik and Mike Carcone. Jenik and Carcone are first and second on the team for power-play goals with eight and seven, respectively.

3) Jan Jenik’s game-tying power-play strike in the third period was the 21-year-old’s second goal of the evening after he got the Roadrunners on the board earlier in the contest. The performance marked Jenik’s first two-goal game of the season and second of his AHL career. In 14 outings at home this season, Jenik has 15 points (9g 6a) including five of his team-leading eight power-play goals. His two-goal performance Saturday made him the eighth Roadrunner this season to record a multi-goal outing. Mike Carcone (three times) and Ben McCartney (two times) are the only players to accomplish the feat more than once this season.

“Back-to-back weekends on the road gets pretty long. You’re away from your house, your family, your dog, whatever it may be. It’s nice to see the fans, see the family, see everyone.”

Number to Know
23 – The number of saves made by Tucson goaltender Ivan Prosvetov in Saturday’s series opener with the Henderson Silver Knights. Prosvetov earned his second-straight win at the Tucson Arena as he returned to the Roadrunners roster after dressing with the Arizona Coyotes for three games last week.

We’re Doing It Live
Today’s game will be broadcast on AHLtv, as well as on the radio on Fox Sports 1450AM, or on the iHeartRadio app. Coverage begins at 3:45 p.m. MST with Roadrunners Warm-Up, as Jimmy Peebles gets you ready for the game before “Voice of the Roadrunners” Adrian Denny has the call at 4:00 p.m. live from the Tucson Arena.