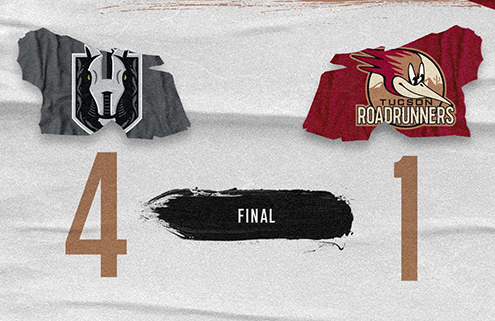 Tucson, Arizona – The Tucson Roadrunners faced off against the Henderson Silver Knights for the second game of a back-to-back weekend series at the Tucson Arena Sunday afternoon. The Roadrunners outshot Henderson 35 to 20 but came up short in the special-teams battle, as the Silver Knights tallied a pair of power-play goals in the second period. The AHL’s leading rookie scorer Matias Maccelli got the Roadrunners on the board in the first period with his 13th goal of the season, tying him with Jan Jenik for second on the team behind Mike Carcone. Goaltender Ivan Prosvetov was back in net for Tucson, stopping 16 shots in his second-straight start.

After the first goal of Saturday’s series opener came just 2:31 into the contest, it wasn’t until the final 6:26 of the first period that the Roadrunners got on the board to open the scoring. Tucson had been applying pressure in the Henderson zone for most of the period, but finally broke through when Matias Maccelli scored his 13th goal of the season to give the Roadrunners a 1-0 lead. Tucson continued to have a firm hold on the first period, outshooting the Silver Knights 13-4 and holding Henderson scoreless for the first 20 minutes of play. The Roadrunners controlled the game in terms of puck possession and shots on goal before a two-minute minor for interference sent the Silver Knights to the first power-play of the contest. Henderson was able to cash in on the man-advantage to even the score up at one with 11:08 still to play in the middle frame. The Silver Knights added another goal less than three minutes later to take their first lead of the night in the latter half of the second period. The Roadrunners weren’t awarded their first power-play of the night until the final six minutes of the second, but Henderson was able to keep them out of the back of the net. The Silver Knights tacked on another power-play goal with less than two minutes left in the second period, completing the three-goal period. The end of the second and beginning of the third period featured more penalties and hard hits exchanged by both teams, resulting in more time on the power-play for Henderson to begin the third. Tucson was able to wrestle some momentum away from the Silver Knights by fending off their early third-period power-plays and then drawing a man-advantage of their own. The Roadrunners couldn’t convert on the special-teams situation but regained control of shots on goal and overall puck possession. Henderson extended their lead to 4-1 with a second-chance goal as time wound down in the latter half of the third period. Tucson pulled goaltender Ivan Prosvetov with just over four minutes still on the clock but couldn’t mount a comeback, as the Silver Knights came away with a 4-1 win to split the weekend series.

“We were happy with [Saturday] night but we’re not happy with tonight. For our group and where we’re at we need to find ways to win games back-to-back. Points are important, so we have to go back to the drawing board.”

STARTING OFF STRONG – After falling behind early in the first period of Saturday’s series opener with Henderson, the Roadrunners set the tone in Sunday’s opening period by jumping out to a 1-0 lead and holding the Silver Knights scoreless. Tucson outshot Henderson 13-4 in the first frame and dominated overall puck possession while staying out of the penalty box as well.

Watch Tucson Roadrunners leading scorer Matias Maccelli net his 13th goal of the season in the first period of Sunday’s series finale with the Henderson Silver Knights. The rookie forward now has nine points (3g 6a) in seven home games since the start of 2022. The 21-year-old passed the 50-point mark in Saturday’s series opener with a goal and two assists.

The Tucson Roadrunners continued Kids Weekend with their Sunday afternoon matchup against the Henderson Silver Knights. All kids 12 and under saw the game for free with a paying adult and received a Roadrunners-themed educational workbook. $6 Kids Meals were available for purchase during the Sunday matinee matchup.