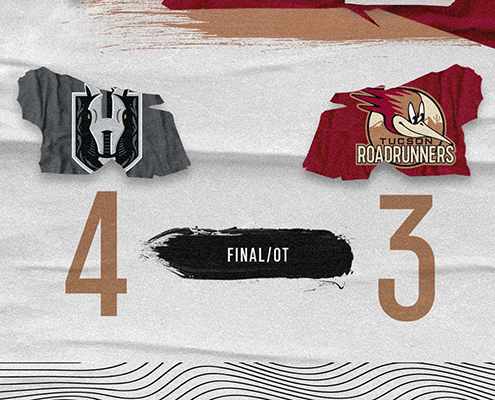 The Roadrunners and Silver Knights each came out of the gate with a lot of energy, with both teams seeing good looks while on the attack. Despite facing a team with a reputation for scoring early, Tucson struck first in Tuesday’s contest when Travis Barron took a series of passes net-front to bury the first goal of the night for himself and the Roadrunners. Less than two and a half minutes later, Barron delivered with his second goal of the period, pushing Tucson’s lead to 2-0. The goal earned Barron his first multiple-point performance of the season, and his third score in as many games. The Roadrunners nearly extended their lead even further in the final six minutes of the opening frame but had some shots ring iron and others turned aside by Henderson netminder Jiri Patera. Tucson headed to the first intermission with their 2-0 lead intact but were tasked with opening the second period on the penalty-kill. The Silver Knights answered back on the man advantage with a deflection goal in the first minute of the middle frame, cutting the Roadrunners lead to 2-1. Henderson’s goal was the only score of the second period, as both teams were kept off the board for the next 21:28 despite each taking a turn on the power-play. The Roadrunners came back and got a goal early in the third period to extend their lead back out to two. Terry Broadhurst had the score for his second of the season. The Silver Knights once again pulled to within a goal five minutes later, making the score 3-2 with just over 12 and a half minutes to go in regulation. The Roadrunners went on a crucial penalty kill at the 10:31 mark of the third period and were able to draw a penalty of their own less than a minute into the situation to take the pressure off goaltender Ivan Prosvetov. With seven seconds to go in the Roadrunners man advantage, they were sent to the penalty box again, this time for goaltender interference. Tucson was successful on yet another crucial penalty-kill, but Henderson tied up the game with just 2:40 remaining in regulation to force overtime, where they netted the overtime game-winner 1:14 into the extra period.

Tucson picked up a standings point and will once again face the Silver Knights Wednesday evening at the Tucson Arena, starting at 6:30 p.m. MST, with coverage beginning at 6:15 on Fox Sports 1450AM with Roadrunners Warm-Up hosted by Jimmy Peebles. Then, “Voice of the Roadrunners” Adrian Denny will have all the action live from the Tucson Arena for Tucson’s last home game before Christmas.

HOME IS WHERE THE NET IS – The Roadrunners extended their AHL Pacific Division lead for most goals scored on their home ice in Tuesday’s contest with the Henderson Silver Knights, netting three goals to make it 42 total goals scored at home in 10 games at the Tucson Arena. The Roadrunners also lead the division in penalty minutes at home and have won six of their last 10 games in the Old Pueblo.

Watch Roadrunners forward Travis Barron net his first of two goals in the first period of Tuesday night’s matchup with the Henderson Silver Knights at the Tucson Arena. Barron scored later in the period to make it three goals in as many games with the Roadrunners dating back to December 10 against the Stockton Heat.

Tucson Roadrunners goaltender Ivan Prosvetov tracks the puck in Tuesday night’s matchup with the Henderson Silver Knights at the Tucson Arena. Prosvetov made his fifth-straight start for the Roadrunners and has recorded at least 30 saves in each of those appearances.