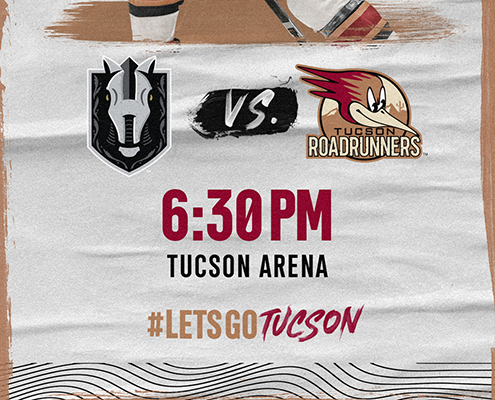 The Tucson Roadrunners wrap up their final home stand before Christmas Wednesday night as they’ll host the Henderson Silver Knights for the second-straight evening. The Roadrunners will look to earn three out of four possible standings points against the Silver Knights with a win on Wednesday, after falling in overtime in the series opener by a score of 4-3.

Three Things
1) The Roadrunners scoring in Tuesday night’s series opener was headlined by forward Travis Barron. Barron scored a pair of goals in the first period to earn his first multiple-point performance of the season. Barron is now one of four Tucson players to score multiple goals in a period, joining Ben McCartney, Hudson Fasching, Matias Maccelli. All four players accomplished the feat on home ice, where the Roadrunners have a Pacific-Division best 42 goals scored.

3) While the Roadrunners are in Tucson taking on the Henderson Silver Knights, Defenseman JJ Moser is slated to make his NHL debut just up I-10 when the Ariziona Coyotes host the New York Rangers at Gila River Arena. At the time of his call-up, Moser led all Roadrunners defensemen in goals and points, and is one of three rookies with at least five goals on the season. He is second in the AHL for defensemen in goals and will be the eighth Roadrunner from the opening night roster to appear in a game with the Coyotes this season. Moser is tied for the team lead in power-play goals with three, including the game-winner with 50 seconds remaining in regulation against the Abbotsford Canucks on November 27.

What’s The Word?
Tucson Roadrunners Head Coach Jay Varady on the recent performance of forward Travis Barron, who has three goals in as many games dating back to December 10:

“I think he’s a guy who shows up to work every day, shows up to practice every day ready to work, and he’s getting rewarded for his efforts.”

Number to Know
3 – The number of different Roadrunners defensemen to record a point in Tuesday’s contest with the Henderson Silver Knights. Tucson’s defensive unit stepped up in the absence of their leading scorer, JJ Moser, with Vladislav Kolyachonok, Cole Hults, and Victor Soderstrom each recording an assist. Soderstrom scored his first goal of the season Friday against the Stockton Heat.

We’re Doing It Live
Tonight’s game will be broadcast on AHLtv, as well as on the radio on Fox Sports 1450AM, or on the iHeartRadio app. Coverage begins at 6:15 p.m. MST with Roadrunners Warm-Up, as Jimmy Peebles gets you ready for the game before “Voice of the Roadrunners” Adrian Denny has the call at 6:30 p.m. live from the Tucson Arena.