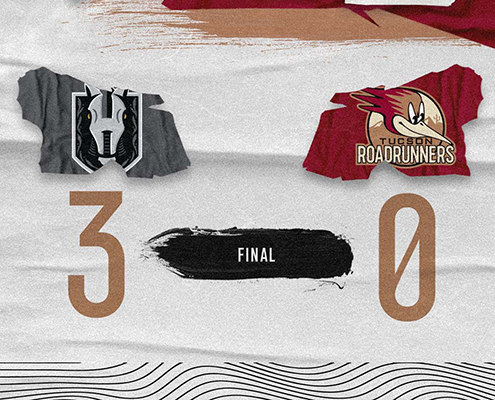 Tucson, Arizona – The Tucson Roadrunners concluded their longest home stand of December with a 3-0 loss to the Henderson Silver Knights. Tucson outshot the Silver Knights 36-26 but were unable to put the puck past Henderson goaltender Logan Thompson. Zane McIntyre made his third start in net for the Roadrunners and recorded 23 saves in Wednesday’s contest, allowing just one five-on-five goal.

After the Roadrunners scored twice in the first 6:20 of Tuesday night’s matchup, the first period of Wednesday’s game was scoreless for both teams. Henderson was blanked on each of their first two power-play opportunities in the opening frame, and the Roadrunners were kept off the board on their lone chance on the man advantage. Henderson opened the middle frame with 1:14 remaining on their third power-play of the evening and used it to score the first goal of the night 44 seconds into the period to take a 1-0 lead. Tucson took a pair of trips to the power-play but couldn’t capitalize and headed into the third period still trailing 1-0. The Roadrunners outpaced the Silver Knights in shots on goal for the first 40 minutes of play, recording 10 shots in each of the first two periods. Tucson saw several good looks in the offensive zone to open the third period but couldn’t quite get the bounce they were looking for. The team turned up the physicality in the third period after a hard hit on veteran forward Terry Broadhurst. The Silver Knights stood their ground, adding a pair of insurance goals less than two minutes apart to push their lead to 3-0 with 6:39 remaining in regulation. The Roadrunners kept rifling off shots, but Henderson goaltender Logan Thompson continued to turn everything aside to complete the shutout, as a late penalty on Tucson ended their chance on the attack.

The Roadrunners will head out on the road for a three-game, two-country road trip beginning Saturday night in California against the Ontario Reign. Saturday’s contest begins at 7:00 p.m. MST, with coverage beginning at 6:45 on Fox Sports 1450AM with Roadrunners Warm-Up hosted by Jimmy Peebles. Then, “Voice of the Roadrunners” Adrian Denny will have all the action live from Ontario.

“I think five-on-five we played a good game. I thought we did a good job defensively and had lots of scoring chances throughout the game, we just weren’t able to convert at key times.”

MOSER MAKES HIS DEBUT – While the Roadrunners were taking on the Henderson Silver Knights Wednesday evening at the Tucson Arena, defenseman JJ Moser made his NHL debut just up I-10 with the Arizona Coyotes. Moser became the fourth Roadrunner to make his NHL debut this season, and the eighth player from Tucson’s opening night roster to appear for the Coyotes.

Watch Tucson goaltender Zane McIntyre make a sequence of saves in the second period of Wednesday night’s matchup with the Henderson Silver Knights. The game marked McIntyre’s third start for the Roadrunners and the 29-year-old made 23 saves.

Tucson Roadrunners goaltender Zane McIntyre stands tall in net during Wednesday night’s contest with the Henderson Silver Knights. McIntyre stopped 23 shots in his third start with Tucson, after making his Roadrunners debut on November 21 in Iowa.