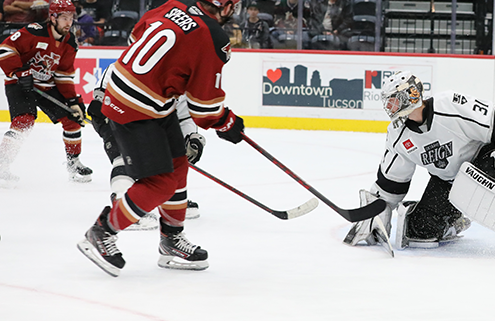 The pair flew to Los Angeles with the Roadrunners Thursday evening in preparations for Saturday’s game in Ontario and made the quick trip to Orange County following their recalls to join the Coyotes in Anaheim prior to their Friday evening contest in Anaheim.

The 24-year-old Speers has registered 1-1-2 and 12 PIM in 20 games with the Roadrunners this season. The Sault Ste. Marie, Ont., native has collected 20-19-39 and 88 PIM in 171 career AHL games. He also appeared in three NHL contests with the New Jersey Devils in 2016-17. The 5-foot-11, 189-pound Speers was drafted by the Devils in the third round (67th overall) in the 2015 NHL Draft. Speers was acquired by the Coyotes from New Jersey with Taylor Hall in exchange for Arizona’s 2020 first round draft choice (conditional), Arizona’s 2021 third round draft choice (conditional), forwards Nick Merkley and Nate Schnarr and defenseman Kevin Bahl on December 16, 2019.

The Roadrunners open a three-game road trip Saturday in Ontario at 7 p.m. before continuing on to Abbotsford, British Columbia for games with the Canucks Wednesday and Thursday.