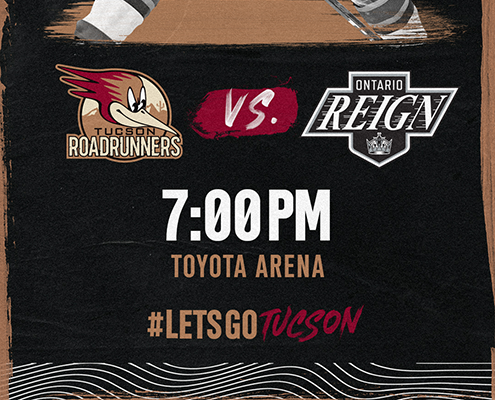 1) The Roadrunners are back on the road after playing four games in six nights at the Tucson Arena that saw Tucson come away with a 5-4 shootout victory Friday, December 10 against the Pacific-Division leading Stockton Heat. The Roadrunners rallied back from down 4-2 to secure their third-straight home comeback win dating back to November 26 against the Abbotsford Canucks. Tucson earned another standings point when they went to overtime with the Henderson Silver Knights on Tuesday, December 14.

2) The Roadrunners and Reign split their first two meetings of the season at the Tucson Arena November 12 and 13. Tucson narrowly outscored Ontario in the pair of games 11-10, which featured an 8-4 victory November 12. In that game, Roadrunners leading scorer and rookie forward Matias Maccelli recorded his first career AHL hat trick with a five-point performance, including two power-play goals in the third period. The contest marked Ontario’s first regulation loss of the season after a 9-0-0-1 start.

What’s The Word?
Tucson Roadrunners defenseman Victor Soderstrom on the skill of the team and what they need to do to be successful:

“Obviously this is a very good level and we have a lot of skilled players. We’re a strong skating team, and to play at your best you need to play simple and use your skating. Forecheck them hard, win pucks and battles down in their own end, I think that’s what we need to do.”

Number to Know
2.5 – The number of goals allowed per-game on the road by the Roadrunners this season, which ranks as second-best in the AHL Pacific Division. Their 20 total goals allowed in away games is the second fewest in the AHL, behind only the Utica Comets (19).

We’re Doing It Live
Tonight’s game will be broadcast on AHLtv, as well as on the radio on Fox Sports 1450AM, or on the iHeartRadio app. Coverage begins at 6:45 p.m. MST with Roadrunners Warm-Up, as Jimmy Peebles gets you ready for the game before “Voice of the Roadrunners” Adrian Denny has the call at 7:00 p.m. live from the Toyota Arena.