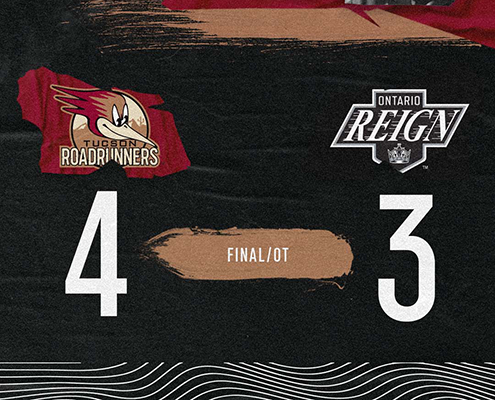 Ontario, California – The Tucson Roadrunners won a back-and-forth battle with the Ontario Reign Saturday night at the Toyota Arena, coming back from an early 1-0 deficit to earn a 4-3 overtime win. Vladislav Kolyachonok netted the game-winner for Tucson just 59 seconds into the extra period, his second overtime goal this season. Ivan Prosvetov made his sixth appearance in the Roadrunners last seven games and stopped 18 shots, earning his seventh win on the year.

Tucson came out in the first period with some early time in the Ontario zone with some quality chances, but it was the Ontario Reign that got on the board first with their Teddy Bear Toss Goal. The goal was scored by Ontario’s leading scorer Martin Frk for his 13th goal of the season. After the playing surface had been cleared of teddy bears, play resumed with the Roadrunners hungry to tie up the game. Tucson did just that 2:41 into the continuation of the opening frame when Cameron Hebig deflected the puck for his fifth goal of the season. The score remained knotted at one for the next 29:16, including the entirety of the middle period. Mike Carcone gave the Roadrunners their first lead of the night just 1:02 into the third period with a power-play blast for his fifth goal of the 2021-2022 campaign. The lead didn’t last long, as the Reign answered back on the next shift with a goal of their own to tie the contest back up at two. Tucson retook the lead just past the midway point of the third period when Cole Hults lit the lamp for the first time this season. Ontario once again answered back with an equalizing goal, this time 40 seconds later, to even the score back up at three. With time winding down in regulation, both teams traded opportunities to secure a win in regulation, but goaltender Ivan Prosvetov held firm in net for Tucson and the teams headed to overtime still tied at three. The Roadrunners needed an extra period to decide their game for the third time in their last five contests. No stranger to overtime heroics, Vladislav Kolyachonok carried in the puck from the neutral zone and rifled it past Ontario netminder Matthew Villalta for his second overtime game-winner of the season. The goal came just 59 seconds into the extra period and secured the 4-3 win for the Roadrunners.

Tucson will continue their road trip with a pair of games up north with the Abbotsford Canucks Wednesday and Thursday in BC. Wednesday’s game is slated to start at 8:00 p.m. MST, with coverage beginning at 7:45 on Fox Sports 1450AM with Roadrunners Warm-Up hosted by Jimmy Peebles. Then, “Voice of the Roadrunners” Adrian Denny will have all the action live from the Abbotsford Centre.

Roadrunners defenseman Cole Hults on Tucson’s 4-3 overtime win against the Ontario Reign Saturday night on the road in California.

CARCONE AND SPEERS STOP BY – The Tucson Roadrunners were aided in Saturday’s 4-3 overtime win by forwards Blake Speers and Mike Carcone. The pair took the trip from Anaheim to Ontario Saturday afternoon, after being recalled by the Arizona Coyotes the day prior. Speers appeared in the Coyotes 5-4 overtime against the Anaheim Ducks Friday night at the Honda Center and tallied over seven minutes of ice time.

Tucson Roadrunners players Ty Emberson and Ivan Prosvetov block the puck in Saturday night’s 4-3 overtime victory in Ontario against the Reign. Emberson returned to the Tucson lineup for the first time in five games, while Prosvetov made his sixth start in the Roadrunners last seven games, stopping 18 shots and earning his 7th win of the season