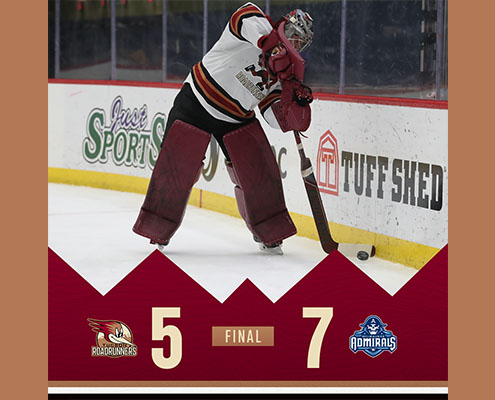 Tucson, Arizona – The Roadrunners suffered a 7-5 defeat to the Milwaukee Admirals in Tuesday night’s series opener from the Tucson Arena. Tucson fell behind early by a score of 3-0 but pulled to within one of the Admirals four separate times before the end of the contest. Tuesday night marked the return of Mike Carcone to the Roadrunners lineup for the first time since December 23, as the top scorer in the AHL extended his league lead with two goals and an assist. The Roadrunners will wrap up the midweek set with the AHL affiliate of the Nashville Predators Wednesday night from the Tucson Arena at 6:30 p.m. MST.

Roadrunners forward Milos Kelemen netted Tucson’s first shorthanded score of the year in the second period of Tuesday’s series opener against the Milwaukee Admirals. The goal was Kelemen’s eighth overall on the season, as it opened the scoring in the middle frame and brought the Roadrunners to within one of the Admirals. The 23-year-old was one of four Tucson skaters to tally multiple points in the 7-5 defeat to Milwaukee (Mike Carcone, Adam Cracknell, Victor Soderstrom).

MAGIC MIKE – Tucson Roadrunners forward Mike Carcone returned to the Tucson lineup Tuesday night for the first time since December 23 and notched a three-point outing with a pair of goals and an assist. The 26-year-old extended his league lead in points to 45 (18g 27a) with the effort, which he still retained despite being recalled by the Arizona Coyotes and appearing in six NHL games since December 27. The strong showing marked Carcone’s 14th multiple-point performance of the season, as he extended his active point streak with the Roadrunners to six games dating back to December 17 in San Diego.

Roadrunners forward Travis Barron exchanged blows with Milwaukee’s Tim Schaller with 18 seconds remaining in the middle period of Tuesday’s series opener against the Admirals. The bout represented Barron’s team-leading sixth time dropping the gloves this season, and the pair received ten-minute game misconduct penalties to go along with their five-minute fighting majors. Barron and Schaller weren’t the only players to go at it on Tuesday, as Tucson’s Curtis Douglas dropped the gloves with Tommy Apap early in the first period for Douglas’ second fight since joining the Roadrunners in November.

“It’d be cool, it’s something I’ve never experienced. Especially with having two kids now, it’s something they’d get to experience too if I’m lucky enough to be selected. It’d be a pretty cool experience for the whole family. I’d be excited if that happens.”

Roadrunners forward Mike Carcone on the possibility of being named an AHL All-Star this season. Carcone leads the American Hockey League in points with 45 (18g 27a), as well as power-play goals with 11. The 26-year-old added to both totals Tuesday night with a goal on the man-advantage and three total points in the contest (2g 1a).

The Admirals jumped out to an early 2-0 lead Tuesday with a quick pair of goals in the opening 1:59 of the contest, then added to their advantage with the first power-play strike of the evening 1:07 later. The goal on the man-advantage was scored by Luke Evangelista for his second tally of the period and a 3-0 Admirals advantage. Shortly after the third Milwaukee score, Tucson’s Curtis Douglas dropped the gloves with Tommy Apap for his second fight since joining the Roadrunners in late November. Tucson got on the board late in the period with Captain Adam Cracknell’s 11th goal of the season, with a netfront shot set up by Hudson Elynuik from the corner. With the secondary assist, forward Mike Carcone extended his AHL lead in points to 43 in his first game back with the Roadrunners since December 23. Carcone kept it going in his return from the Arizona Coyotes with a goal of his own 2:42 later, as his league-leading 11th power-play goal and 44th overall point brought Tucson to within one of Milwaukee. The Admirals answered back less than a minute later with an even-strength score from former Roadrunners defenseman Jordan Gross to regain their two-goal lead at 4-2 entering Tuesday’s first intermission. With 7:32 gone by in the middle period, Milos Kelemen recorded Tucson’s first shorthanded goal of the season and his eighth score overall to bring the Roadrunners back to within a goal of Milwaukee at 4-3. The Admirals responded once again 1:16 later to take another multi-goal lead at 5-3, but Tucson continued the back-and-forth with Mike Carcone’s second time lighting the lamp and third total point on the night to keep it a one-goal game at 5-4. The second-period shootout went on in the back half of the frame with Milwaukee’s sixth tally of the contest, as they led 6-4 with 8:14 remaining in the middle 20 minutes of action. The final score of the frame by the Admirals capped off a streak of four combined goals within the span of 4:14, as the remainder of the second period was without another goal. The action continued in the frame, however, as Travis Barron took on Milwaukee’s Tim Schaller in a heavyweight bout for Barron’s team-leading sixth fight of the season, as the pair of forwards each earned ten-minute game misconduct penalties. The final 17 seconds of the middle period were completed before the start of the third, as the Roadrunners and Admirals went to an early intermission with Milwaukee still up by a pair. Tucson opened the scoring for the second-straight period, as Curtis Douglas took a pass from Milos Kelemen and flipped it below the crossbar of the net to bring Tucson to within one of the Admirals for the fourth time since they took the lead 1:36 into the contest. With 4:20 remaining in regulation, the Admirals grabbed another two-goal advantage on a five-on-three power-play strike, scored by Evangelista to complete the hat trick and cement a 7-5 Milwaukee win in the series opener.