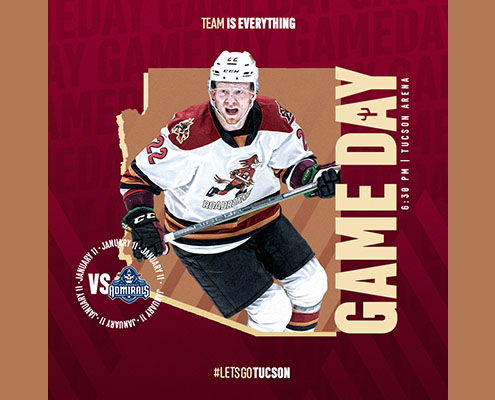 The Roadrunners close out their four-game home stand at the Tucson Arena Wednesday night, with the second of two contests against the Milwaukee Admirals. Tuesday’s series opener was the Admirals first ever trip to the Tucson Arena, while Wednesday marks their final appearance of the season in the Old Pueblo. The Roadrunners fell to the AHL affiliate of the Nashville Predators by a score of 7-5 in the series opener on Tuesday, outscoring them 5-4 over the final 47:12 of the game. Following Wednesday’s series finale, Tucson will head on the road for three games in five days against three different teams, beginning on Saturday against the Bakersfield Condors. The series finale represents another Kids Free Wednesday at the Tucson Arena, as all kids 12 and under can receive a free ticket with a paying adult at the Tucson Arena Box Office and $2 souvenir cup refills also available during the game.

Three Things
1) Tuesday’s series opener between the Roadrunners and Admirals was headlined by the return of the AHL’s leading scorer Mike Carcone to the Tucson lineup. Carcone was back with the Roadrunners for the first time since December 23 against the San Diego Gulls and recorded two goals and an assist to extend his league lead in total points to 45 (18g 27a). In addition, one of his goals came on the man-advantage for his league-leading 11th time lighting the lamp on the power-play this season. The 26-year-old enters Wednesday on an active scoring streak of six games dating back a four-point performance (2g 2a) on December 17 in San Diego. Tuesday marked Carcone’s 14th multi-point outing of the season and his seventh time tallying three or more points through 28 total appearances.

2) Along with Mike Carcone’s three-point night, three other Tucson skaters notched multi-point outings on Tuesday against Milwaukee. After Carcone assisted on Adam Cracknell’s first-period score, the Roadrunners Captain returned the favor and tallied the only assist on Carcone’s second-period goal for his second point of the contest. Forward Milos Kelemen netted Tucson their first shorthanded goal of the season to open the second period, before adding an assist on a third-period score by Curtis Douglas. Also assisting on Douglas goal in the final frame was defenseman Victor Soderstrom for his second of the night after factoring into Carcone’s power-play strike in the first period. The pair of assists moved Soderstrom into a tie for tenth in the AHL for assists by a defenseman with 17.

3) The Roadrunners enter the series finale against Milwaukee with an overall record of 3-1-0-0 on Wednesdays this season, outscoring their opponents in those games by a count of 15 to 8. Tucson has tallied three goals or more in all four Wednesday-night contests this year, including at least one on the man-advantage in three of the four matchups. The Roadrunners retook sole possession for the AHL Western Conference’s most power-play goals on home ice Tuesday with Mike Carcone’s second-period score on the man-advantage. Their 21 power-play goals at the Tucson Arena are good for the third-most in the American Hockey League at home, and more than six AHL teams have overall on the season entering Wednesday.

“He’s obviously the leading scorer in the league. It’s very impactful. Our guys in the room are pushing for him and I think he brings guys out there with him. He was a pretty good version of himself [Tuesday].”

Roadrunners Head Coach Steve Potvin on the impact of forward Mike Carcone returning to the Tucson lineup. In his first outing with the Roadrunners since his call-up to the Arizona Coyotes on December 27, Carcone led the team with three points (2g 1a) and six shots on goal.

Number to Know
2 – The number of fights in Tuesday’s series opener between the Roadrunners and Admirals, as forwards Curtis Douglas and Travis Barron each dropped the gloves in the first meeting of the year against Milwaukee. Douglas’ bout came just 3:14 into the contest against Tommy Apap for his second fight since being traded to the Roadrunners on November 23, 2022. Meanwhile, Barron dropped the gloves for a team-leading sixth time this season, as he and Milwaukee’s Tim Schaller each earned ten-minute game misconducts for fighting at puck drop. Along with their fights, Douglas (1g) and Barron (1a) also contributed to Tucson’s offense with a point apiece.

We’re Doing It Live
Tonight’s game will be broadcast live on AHLtv, as well as on the radio at FOX Sports 1450AM and the iHeartRadio app. Coverage begins at 6:15 with Roadrunners Warm-Up hosted by Jimmy Peebles, before “Voice of the Roadrunners” Adrian Denny has all the action from the Tucson Arena.