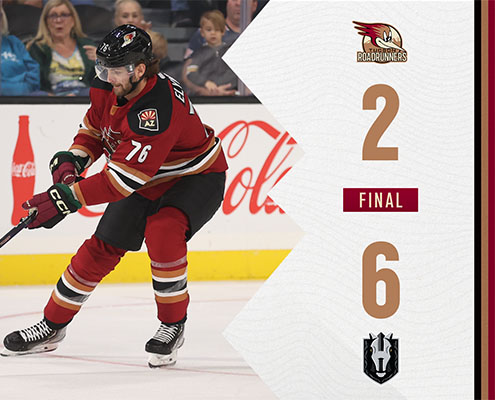 Henderson, Nevada – The Tucson Roadrunners faced off with the Henderson Silver Knights Saturday afternoon at The Dollar Loan Center for their second-straight meeting to open the season. After taking game one Friday night with a 2-1 win, the Roadrunners fell to the Silver Knights in the series finale by a score of 6-2. Backstops Jon Gillies and Ivan Prosvetov both spent time in net for Tucson, with Prosvetov stopping 13 of 14 shots faced in relief. Returning Roadrunner Mike Carcone tallied assists on each of Tucson’s two goals for the team’s first multi-point night of the season.

Announcing the starting lineup for Saturday’s matchup against the Henderson Silver Knights was Roadrunners Captain Adam Cracknell’s father, Peter. The game was number 1,000 in the professional career of Cracknell, as the 37-year-old was called by his father to start the game at right wing for Tucson.

TYSON TAPS IN – Tucson Roadrunners forward Tyson Empey dropped the gloves in the first period of Saturday’s meeting with the Henderson Silver Knights for his first fight of the 2022-2023 season. The second-year Roadrunner also scored the game-winning goal in Friday’s 2-1 victory to make his presence known in the first weekend of the season.

Saturday’s matchup with the Henderson Silver Knights marked the 1,000th in the professional career of Tucson Roadrunners Captain Adam Cracknell. The 37-year-old was named Captain ahead of his first season in the desert after joining the Roadrunners in the offseason.

“That was a special moment. The guys were very supportive and even made me skate a lap by myself. It was exciting.”

Roadrunners Captain Adam Cracknell on playing in the 1,000th game of his professional career Saturday against Henderson. Tucson’s starting lineup was announced by Adam’s father, Peter, which included the 37-year-old penciled in at right wing.

After dropping the season opener Friday night, the Silver Knights came out of the gate strong in Saturday’s rematch. Henderson took a 2-0 lead just 4:15 into the contest, with both goals being scored by Pavel Dorofeyev. The Roadrunners got on the board in the latter half of the opening frame, as sturdy defenseman Ronald Knot rifled a shot from the blue line for his first North American professional goal, cutting the Silver Knights lead to 2-1. Henderson brought their lead back out to two with a goal in the final 4:15 of the first period, followed by a fight between Tucson’s Tyson Empey and Henderson’s Zack Hayes. The Roadrunners answered back early in the middle frame with Jean-Sebastien Dea’s first goal as a Roadrunner just 1:34 into the period. The Silver Knights once again responded with a goal nine seconds later to keep their advantage at two goals, then added to it with a shorthanded strike 3:59 later. The goal marked the final score of the second period, as Ivan Prosvetov came into the game for Tucson and shut down the Silver Knights for the rest of the frame. Prosvetov continued to shut down Henderson for the first half of the third period, until the Silver Knights scored on the power-play just past the midway point of the final frame to make it a 6-2 advantage. A fight between Tucson’s Jan Jenik and Henderson’s Mason Primeau in the final seven seconds of regulation was the last action of the contest, as the Silver Knights came away with a 6-2 victory to split the opening series of the season with Tucson. The Roadrunners will head back to Tucson for their 2022-2023 Home Opener at the Tucson Arena on Saturday, October 22 against the Bakersfield Condors.

Tucson Roadrunners Road Ahead: Back Home For Bakersfield
Scroll to top