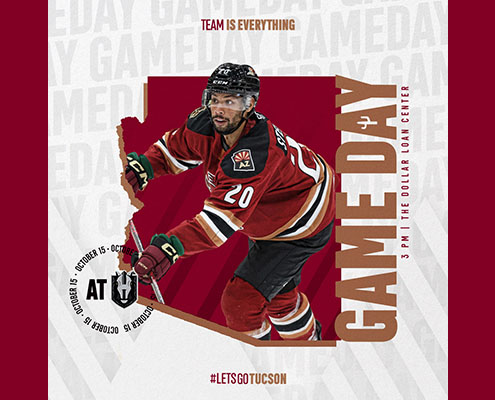 The Roadrunners wrap up the opening series of the 2022-2023 season Saturday afternoon with another matchup against the Henderson Silver Knights at The Dollar Loan Center. Tucson took the first game of the set Friday night by a score of 2-1 for their fifth consecutive Opening Night victory, as they’ll now look to start the year 2-0 for the second time in three years. The Roadrunners also have a chance to win their fourth-straight regular-season contest against the Silver Knights dating back to last year, when they swept the Vegas Golden Knights AHL affiliate March 25 and 26 in their last trip to the Silver State.

Three Things
1) Providing the offense in Friday’s 2-1 win for Tucson were forwards Milos Kelemen and Tyson Empey. Kelemen’s goal was the first of the contest, coming 7:10 into the second period for the 23-year-old’s first North American professional goal and a 1-0 Roadrunners lead. Assisting on the goal were Kelemen’s Opening Night linemates: third-year Roadrunner Cameron Hebig and Nathan Smith, who made his AHL debut after 10 NHL games with the Arizona Coyotes in 2021-2022. Second-year forward Tyson Empey extended Tucson’s advantage to 2-0 exactly two minutes later, assisted by Travis Barron, also back for year two in the desert. Tucson narrowly outshot the Silver Knights by a count of 34 to 30.

2) The Roadrunners continued their early-season success Friday night with their 2-1 win over the Henderson Silver Knights, as it marked their fifth consecutive Opening Night victory and fourth-straight season-opening win while allowing a goal or less. Tucson has a chance to improve to 2-0 for the first time since the 2020-2021 season, which was current Head Coach Steve Potvin’s first season at the helm of the Roadrunners. The 2020-2021 Tucson squad jumped out to a 4-0 record to begin the campaign, with goaltender Ivan Prosvetov in net for all four victories. Friday’s win gave Prosvetov his third-consecutive Opening Night win, as the 23-year-old has begun each of his first three seasons in Tucson with an individual record of 2-0 or better.

3) Saturday’s matinee matchup with the Henderson Silver Knights will wrap up Tucson’s first road trip of the season, as they’ll return home the following weekend to play host to the Bakersfield Condors at the Tucson Arena. Game one of the two-game set is scheduled for 7 p.m. on Saturday, October 22, with the first 1,500 fans receiving a Roadrunners Rally Towel courtesy of Williams and Associates. They’ll conclude the first home series of the season on Sunday at 4 p.m. with a Pre-Game Trick or Treat presented by Raytheon, and a special Post-Game Open Skate with select Roadrunners players. Tickets for both games can be purchased HERE.

“I was carrying the puck in and didn’t want to dump it, so I held onto it and took the hit. Then I saw [Cameron Hebig] coming in through the middle so I dropped it to him, and they made the plays from there.”

Roadrunners forward Nathan Smith on recording his first AHL point with an assist in Friday’s 2-1 win over Henderson. The 23-year-old made his AHL debut with Tucson after suiting up for 10 games with the Arizona Coyotes in the NHL last season.

Number to Know
999 – The number of professional games played by Tucson Roadrunners Captain Adam Cracknell after appearing in Friday’s Season Opener. Cracknell was named Captain in his first season in the desert, as the 37-year-old is entering his third consecutive season in the AHL’s Pacific Division. Cracknell spent each of the last two seasons with the Bakersfield Condors, while also representing Canada at the 2022 Winter Olympics in Beijing.

We’re Doing It Live
Today’s game will be broadcast live on AHLtv, as well as on the radio on FOX Sports 1450AM and the iHeartRadio app. Coverage will start at 2:45 p.m. with Roadrunners Warm-Up hosted by Jimmy Peebles, before “Voice of the Roadrunners” Adrian Denny has all the action from the Dollar Loan Center in Henderson.