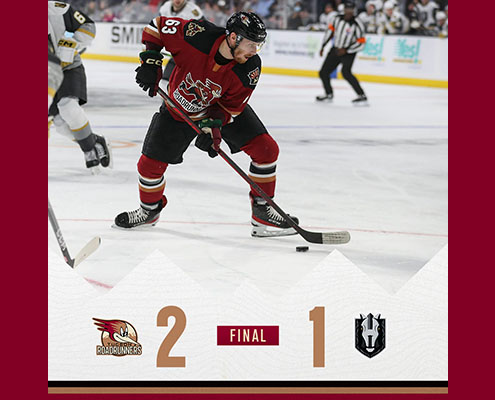 Henderson, Nevada – The Tucson Roadrunners kicked off the 2022-2023 AHL regular season with a 2-1 win over the Henderson Silver Knights, AHL affiliate of the NHL’s Vegas Golden Knights. All three goals in the contest were scored in the second period of play, with forwards Milos Kelemen and Tyson Empey providing the offense for Tucson. Ivan Prosvetov was in net for Tucson as he began his fourth year in the organization by stopping 29 shots for his third-straight victory on Opening Night.

Roadrunners forward Milos Kelemen put Tucson on the board in Friday’s season opener against the Henderson Silver Knights. The goal came in the second period and marked Kelemen’s first professional goal in North America, as he gave the Roadrunners a 1-0 lead.

PENALTY-KILL KEEPS THE LEAD – The Roadrunners special-teams units were busy in Friday’s 2-1 win over the Henderson Silver Knights. Aside from five trips of their own to the power-play, Tucson was forced to fend off a total of six man-advantages for the Silver Knights. The Roadrunners penalty-kill and goaltender Ivan Prosvetov came up big each time, holding Henderson scoreless in special-teams situations.

Roadrunners forwards Laurent Dauphin and Nathan Smith battle with the Silver Knights for the puck in Friday’s Season Opener at The Dollar Loan Center in Henderson. Friday marked Dauphin’s first game with the Roadrunners since the 2018-2019 season when he served as an Alternate Captain for Tucson, while Smith made his AHL debut with Tucson after appearing in 10 games in the NHL last season with the Arizona Coyotes.

“It was a tough game for us with all the penalties, but the penalty-kill did a great job. It was a good win, and we’ll keep going [Saturday].”

Roadrunners forward Milos Kelemen on Tucson’s season-opening win over the Silver Knights. Kelemen opened the scoring Friday night with 7:10 gone by in the second period to put the Roadrunners up 1-0.

Tucson came out firing in the first period of the season, recording the first five shots on goal as they peppered Silver Knights starting goaltender Jiri Patera. A pair of consecutive penalties limited the Roadrunners on offense as they held firm on defense to keep the Henderson power-play off the board. Goaltenders Ivan Prosvetov and Patera continued to keep the puck out of the net in the opening frame, with the score knotted at zero as the contest reached the first intermission. The Roadrunners wouldn’t have to wait much longer for their first goal of the season, as forward Milos Kelemen buried his first goal in North America with 7:10 gone by in the middle period, giving Tucson a 1-0 lead. The opening score was set up by Kelemen’s linemates Nathan Smith and Cameron Hebig, who led the rush into the Henderson zone. The Roadrunners kept it rolling with a goal exactly two minutes later from second-year forward Tyson Empey to make it a 2-0 advantage at the midway point of the second period. The Silver Knights were able to get on the board with 5:49 remaining in the frame, cutting Tucson’s lead to 2-1 as they entered the final 20 minutes of action at The Dollar Loan Center. The Roadrunners continued to fend off the Silver Knights power-play early in the third period, as they finished a perfect six-for-six on the penalty-kill. Henderson pulled goaltender Jiri Patera in the final minutes of regulation looking for the equalizer, but a bench minor for too many men on the ice helped Tucson secure a 2-1 victory and a 1-0 record to start the season.