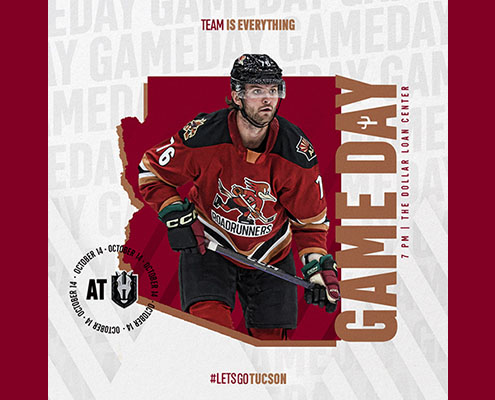 The Roadrunners open the 2022-2023 regular season Friday night with the first of back-to-back matchups against the Henderson Silver Knights, AHL affiliate of the Vegas Golden Knights. The contest marks the first of 72 total games on the season, up from last season’s 68 for AHL Pacific Division squads. Tucson takes on the Silver Knights after splitting a pair of preseason matchups last weekend, with the Roadrunners outscoring Henderson six goals to four overall. In four matchups on the road against the Silver Knights last season, Tucson came away with a 2-1-1-0 record.

Three Things
1) The Roadrunners begin the season with 16 players from last year’s roster back with the team. Among them, seven have split time between Tucson and the Arizona Coyotes: Forwards Mike Carcone (21 career NHL games), Boko Imama (4), and Jan Jenik (15), as well as defensemen Cam Dineen (34), Vlad Kolyachonok (32), and Victor Soderstrom (20). Goaltender Ivan Prosvetov rounds out the list of 2021-2022 Roadrunners with time in the NHL with six total appearances in net for the Coyotes. Also bringing National Hockey league experience to Southern Arizona are forwards Jean-Sebastien Dea (33), Nathan Smith (10), Adam Cracknell (210), Laurent Dauphin (73), and goaltender Jon Gillies (32) for a grand total of 490 combined NHL games played on Tucson’s Opening Night roster.

2) Tucson takes the trip to Henderson to open the season against the Silver Knights, after last facing off in the regular season on March 25 and 26, 2022. The Roadrunners took each of those games for a sweep of the Silver Knights to close out the season series. Current Roadrunners forward Colin Theisen notched his first professional points in game one of the series, with a goal and an assist in Tucson’s 6-3 win over Henderson. Those victories also marked the final two games at the Orleans Arena in Las Vegas, as the Silver Knights transitioned to the new Dollar Loan Center at the start of their next home stand. Tucson will be looking to win their fifth consecutive season opener, with an all-time record of 8-4-0-0 over the first two games of the season.

3) The Tucson Roadrunners and Head Coach Steve Potvin have announced their leadership group for the 2022-2023 season. Forward Adam Cracknell will be wearing the “C” for the second time in his career, as he enters the season with 998 professional games under his belt. Returning Roadrunners Mike Carcone, Boko Imama and Cam Dineen will serve as Alternate Captains. Carcone set a Tucson franchise record with 24 goals in 2021-2022, becoming the first player in team history to lead the Roadrunners in goals in back-to-back seasons. Imama enters his second year in the desert after leading the AHL in penalty minutes last season with 178, which was also a team record. Dineen represents the longest-tenured Roadrunner on the current roster, having joined the team for the 2018-2019 campaign. All three Alternate Captains made their NHL debuts last season with the Arizona Coyotes, combining for 59 total games in the National Hockey League.

“It’s been a long preseason for some of these guys. They’ve been through Rookie Camp, the NHL camp, and now AHL camp. They’re ready and they want to get playing.”

Roadrunners Head Coach Steve Potvin on the team being excited to start the 2022-2023 AHL regular season.

Number to Know
8 – The number of meetings between Tucson and Henderson on the 2022-2023 schedule, which is tied for the most of any opponent. After opening the season on the road in Henderson, the Roadrunners will host the Silver Knights back at the Tucson Arena on November 15 and 16 for their next pair of matchups. The Roadrunners will also have eight matchups apiece with the Bakersfield Condors, Coachella Valley Firebirds, Ontario Reign, San Diego Gulls, and San Jose Barracuda.

We’re Doing It Live
Tonight’s game will be broadcast live on AHLtv, as well as on the radio on FOX Sports 1450AM and the iHeartRadio app. Coverage will start at 6:45 p.m. with Roadrunners Warm-Up hosted by Jimmy Peebles, before “Voice of the Roadrunners” Adrian Denny has all the action from the Dollar Loan Center in Henderson.