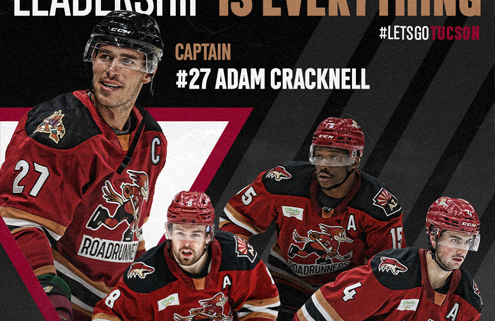 Tucson, Arizona – The Tucson Roadrunners, the American Hockey League affiliate of the Arizona Coyotes, have announced their leadership group for the 22-23 season.

“LEADERSHIP is everything and these gentlemen embody everything that we value,” said Roadrunners Head Coach Steve Potvin. “We’re grateful to have them as part of our group and leading the way for our locker room that is filled with: character, passion and talent. We look forward to a great season.”

Cracknell enters his first season in Tucson as a Veteran of 998 professional games with 210 in the NHL and 627 in the AHL. He represented Canada at the 2022 Beijing Olympics and had 21 goals and 26 assists for 47 points in 58 games.

Carcone, Imama and Dineen all made their NHL debuts with the Coyotes in 2021-2022. Dineen enters his fifth season with the Roadrunners, Carcone his third and Imama his second campaign in Tucson.