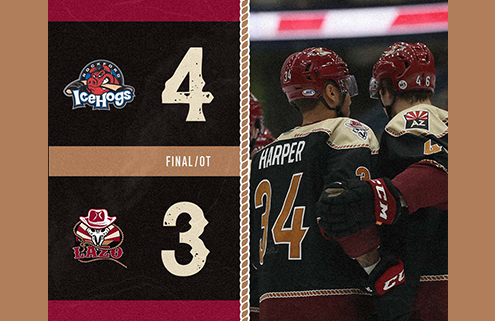 Tucson, Arizona – The Tucson Roadrunners returned home to begin the month of April with a weekend series against the Rockford Ice Hogs. In Friday night’s series opener, Tucson overcame a late 3-2 deficit to force overtime and earn a standings point against the Chicago Blackhawks AHL affiliate. Stephen Harper netted his first AHL goal, while Colin Theisen (2) and Terry Broadhurst (7) added to their goal totals later in the contest. Ivan Prosvetov made his 16th consecutive appearance for the Roadrunners, as he stopped 30 shots on goal.

PENALTY-KILL PREVAILS – The Roadrunners fended off all five of Rockford’s power-plays in Friday night’s series opener, improving to a perfect 12-for-12 over their last two contests. Three of the penalty-kills for Tucson on Friday came while leading by a goal. The Roadrunners currently have the third-best home penalty-kill percentage in the AHL Pacific Division at 82.1%.

The Roadrunners hosted their final El Lazo de Tucson game of the season when they took on the Rockford IceHogs Friday Night at the Tucson Arena. The team donned their alternate El Lazo uniforms celebrating the rich culture and heritage of Southern Arizona. Festivities included food trucks outside the arena prior to the game, and the National Anthem was performed by Sunnyside High School’s Mariachi Band, Los Diablitos de Sunnyside.

“We had a good start and got off to a good lead. We backed off in the middle part of the game, but I liked how we stuck together and got a point out of that one.”

In the first meeting between these teams since the 2018-2019 campaign, it was the Roadrunners that got on the board first. Forward Stephen Harper unleased a one-timer that found the back of the net for a 1-0 lead and his first goal of the season. Credited with the primary assist was Andrew Nielsen for a clean feed to Harper through traffic in the Rockford zone. The next action of the night was a fight between Boko Imama and Rockford’s Kurtis Gabriel, marking Imama’s tenth bout of the season. The Roadrunners extended their lead to 2-0 exactly one minute later, with forward Colin Theisen netting his second goal since joining the team on March 23. Picking up the lone assist on the Theisen goal was defenseman Andrew Nielsen for his fourth point (4a) in three games. The IceHogs got on the board just past the midway point of the first period to cut Tucson’s lead to 2-1. Rockford’s goal marked the final score of the first period, as the Roadrunners entered the middle frame still up by one. The IceHogs added another goal exactly six minutes into the second period, evening the score for the first time since the opening 1:40 of the contest. Rockford took their first lead of the game with 5:15 still to play in the frame, as Ian Mitchell came flying out of the penalty box for a one-on-one with goaltender Ivan Prosvetov. The pair of goals for the IceHogs were the only scores of the second period, as the Roadrunners trailed 3-2 heading into the final 20 minutes of regulation. Tucson came out battling in the third period, as they worked to draw a five-on-three advantage. Not long after the power-plays expired, the Roadrunners got the crucial equalizer goal courtesy of former IceHog Terry Broadhurst. Broadhurst’s goal marked his seventh time lighting the lamp this season and sent the contest into overtime. With 23 seconds gone by in the extra three-on-three period, the IceHogs netted the game-winner as Tucson earned a standings point in the series opener.

The Roadrunners will wrap up the weekend series against Rockford at the Tucson Arena Saturday night. The series finale is scheduled for 7:00 p.m. MST, with coverage beginning at 6:45 p.m. MST on Fox Sports 1450AM with Roadrunners Warm-Up hosted by Jimmy Peebles. Then, “Voice of the Roadrunners” Adrian Denny will have all the action live from the Old Pueblo.