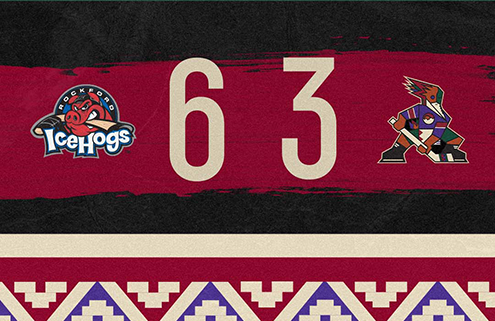 Tucson, Arizona – The Tucson Roadrunners took on the Rockford IceHogs in the second game of a back-to-back series Saturday night at the Tucson Arena. Ben McCartney, Stephen Harper and Cam Crotty found the back of the net for the Roadrunners, as the IceHogs came away with a 6-3 victory to close out the weekend in the Old Pueblo. Josef Korenar was between the pipes for the Roadrunners for the first time since March 5, as he stopped 21 shots on goal. Saturday night also marked Autism Acceptance Night at the Tucson Arena, with the first 1,000 fans receiving a sensory pop pad courtesy of Pizza Hut.

Watch Tucson Roadrunners forward Ben McCartney open the scoring in the first period of Saturday night’s matchup with the Rockford IceHogs. The goal marked McCartney’s 13th goal of the season, leading the active Tucson roster. Assisting on the goal was forward Terry Broadhurst for his fifth point (2g 3a) in his last four outings.

SATURDAY NIGHT’S ALRIGHT – Tucson’s Ty Emberson and Rockford’s Carson Gicewicz dropped the gloves in the third period of Saturday’s matchup at the Tucson Arena, marking the fifth-straight contest with a fight for the Roadrunners. Leading the way during that stretch is forward Ben McCartney, who dropped the gloves in both meetings with the Henderson Silver Knights last weekend.

The Tucson Roadrunners celebrated Autism Acceptance Night on Saturday as they played host to the Rockford IceHogs. The first 1,000 fans received sensory pop pads courtesy of Pizza Hut, as Roadrunners Mascot Dusty left his drum and cowbell at home in favor of a quieter game atmosphere. Throughout the game, the Tucson Arena videoboard displayed facts about autism, as well as messages from Roadrunners players.

“It stings. I thought all the guys worked really hard out there, we just have to be better at the key moments and play a full 60 minutes. It’s tough, but we just have to keep on going and get back at it Tuesday.”

Like the series opener, the Roadrunners once again struck first with a goal 4:14 into the contest. The goal was scored by Ben McCartney for his 13th of the season to give Tucson a 1-0 lead. The IceHogs answered back with a goal 4:05 later to tie the contest at 1-1. The Roadrunners retook the lead on a breakaway score by Stephen Harper with 9:12 still to play in the opening frame. The score marked Harper’s second career AHL goal and second goal of the weekend, putting Tucson back on top 2-1. Rockford once again matched the Roadrunners on the other end, evening the score back up at 2-2 on the power-play with 5:05 still to play in the first period. The goal snapped Tucson’s streak of 13 consecutive successful penalty-kills, as the score remained tied at 2-2 entering the second period. After a back-and-forth first period, the IceHogs took their first lead of the night at 3-2 with 4:31 gone by in the middle frame. This time it was Tucson answering back with a goal in the final 2:36 by Cam Crotty to tie things back up at 3-3. The score marked Crotty’s third time lighting the lamp this season and third point (1g 2a) in the last four games for the defenseman. Rockford retook their lead 1:07 later with a shorthanded goal, matching the score from Friday’s series opener in just the first two periods of play on Saturday as the Roadrunners trailed 4-3 at the second intermission. The IceHogs took the first two-goal lead of the night at 5-3 with the first goal of the third period. The score came 3:49 into the final frame of regulation and marked the largest lead of the weekend since Tucson’s two-goal advantage in the first period of the series opener Friday night. The next action of the period was a fight between Tucson’s Ty Emberson and Rockford’s Carson Gicewicz, Emberson’s first professional fight. Less than a minute after Emberson’s bout and with 1:41 left in regulation, the IceHogs added an empty-net goal to make it a 6-3 lead, which wound up as the final score from the Tucson Arena Saturday night.

The Roadrunners will welcome the Iowa Wild into town for a pair of midweek matchups Tuesday and Wednesday at the Tucson Arena. Tuesday’s series opener is scheduled for 7:00 p.m. MST, with coverage beginning at 5:00 p.m. MST on Fox Sports 1450AM with a special edition of Roadrunners Happy Hour, followed by Roadrunners Warm-Up hosted by Jimmy Peebles. Then, “Voice of the Roadrunners” Adrian Denny will have all the action live from the Old Pueblo.