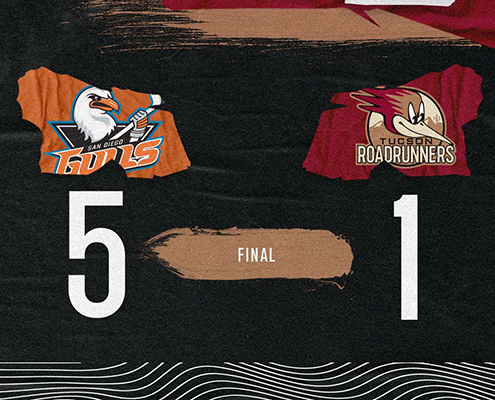 Tucson, Arizona – The Tucson Roadrunners opened the two-game series with their I-8 Border Rivals, the San Diego Gulls, with a 5-1 loss Friday night at the Tucson Arena. Roadrunners goaltender Josef Korenar made his second start for the Tucson, and stopped 28 shots, including 17 in the second period alone.

Korenar faced some pressure from the Gulls early in the first period but turned everything aside to prevent an early defecit. The Roadrunners found their stride on offense later in the period, opening the scoring with a power-play goal by rookie Liam Kirk 8:37 into the opening frame. San Diego tied the game up at one less than two minutes later, with Alex Limoges getting his first of two goals on the night. The teams spent the latter half of the first period and opening half of the second period trading penalties back-and-forth. San Diego took their first lead of the night early in the second period, just after the Roadrunners killed off an extended amount of time on the power-play for the Gulls. The teams continued taking turns on the power-play, but the exchange was capped off with a San Diego power-play goal, pushing their lead to 3-1. Some more penalties later in the period led to some four-on-four hockey, but the score remained at 3-1 heading into the final period. The Roadrunners started off the third period doing all they could to get back into the contest, but San Diego kept the puck out of the back of their net and added a pair of insurance goals to come away with a 5-1 win in the first meeting between these teams on the season.

The Roadrunners wrap up their four-game homestand Saturday night at 7:00 p.m. MST. Coverage starts at 6:45 on Fox Sports 1450AM with Roadrunners Warm-Up hosted by Jimmy Peebles. Then, “Voice of the Roadrunners” Adrian Denny will have all the action live from Tucson, as the team once again dons their “El Lazo de Tucson” alternate identity.

“We know our success comes when we’re playing as a unit. We have to find 60 minutes, not 10 minutes here and five minutes there. We have to play a cleaner game and be more disciplined.”

Tucson Roadrunners Head Coach Jay Varady on his takeaways from Friday’s loss to San Diego, and what he wants the team to bring into the series finale Saturday night.

POINT STREAK FOR LIAM – Roadrunners rookie forward Liam Kirk scored the lone goal for the Roadrunners in Friday night’s matchup with the San Diego Gulls, a power-play goal that gave Kirk a three-game point streak in his first month at the AHL level. The 21-year-old was drafted in the seventh round by the Arizona Coyotes in the 2018 NHL Draft.

Watch Tucson Roadrunners rookie forward Liam Kirk open the scoring in Friday night’s contest at the Tucson Arena, with a power-play tally to put the Roadrunners up 1-0 in the first period.