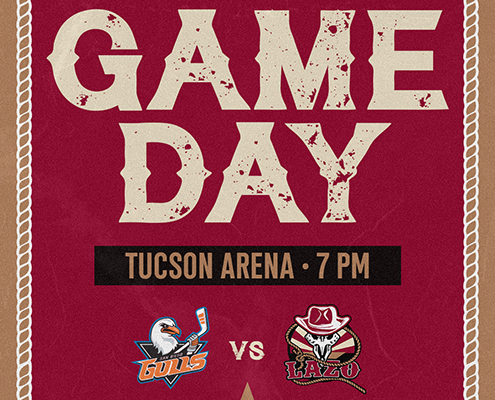 The Tucson Roadrunners wrap up their four-game home stand Saturday night when they take on the San Diego Gulls for the second time this season. The Roadrunners fell to their I-8 Border Rivals Friday night by a score of 5-1. Tucson will look to even up the series with San Diego, with hopes of retaining the I-8 Border Trophy for a fifth straight season.

Three Things
1) The lone goal for the Roadrunners Friday night was scored by rookie forward Liam Kirk. The 21-year-old from Maltby, England is on a three-game point streak with the goal and is tied for the team lead in points. Kirk played alongside fellow rookie Tyson Empey, who led the team in shots with six, and veteran forward Blake Speers. Kirk’s goal came on the power-play and was his first special teams point of the season.

2) Tucson Roadrunners goaltender Josef Korenar made his second start of the season in net for the Roadrunners Friday night. The 23-year-old stopped 28 shots in his first start in front of a home Tucson crowd and turned aside 17 shots alone in the second period. With fellow backstop Ivan Prosvetov currently with Arizona Coyotes, netminder David Tendeck has joined the Roadrunners roster from the Coyotes ECHL Affiliate Rapid City Rush.

3) The Roadrunners will once again take on their El Lazo de Tucson alternate identity Saturday night when they face the San Diego Gulls. The team introduced the identity last season to honor Tucson’s rich heritage. The team will wear their alternate El Lazo uniforms, and Roadrunners mascot Dusty will go by his alter ego, “El Polvo.”

What’s The Word?
Tucson Roadrunners forward Liam Kirk on managing all the breaks and bounces early in the season:

“It’s early in the season, sometimes it takes guys some time to find their rhythm. I think if we just play the right way, we’ll create our own luck. We’ll get those bounces and those scoring chances.”

Number to Know
3 – The number of power-play chances for the Roadrunners in Friday night’s matchup with the San Diego Gulls. The Roadrunners made the most of their chances, capitalizing on their first man advantage of the night to take a 1-0 lead in the first period. The Roadrunners penalty kill went 4/5 in the 5-1 loss to the Gulls.