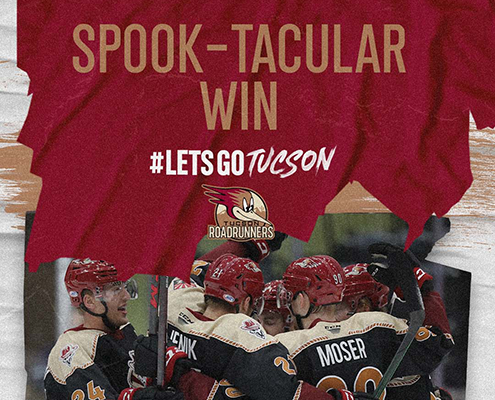 Tucson, Arizona – The Tucson Roadrunners secured a high-scoring win over the San Diego Gulls Saturday night by a score of 6-4. Forward Hudson Fasching led the way with a hat trick and tied the Roadrunners franchise record for points in a game with five. Tucson netminder Josef Korenar earned his first win in a Roadrunners uniform, stopping 26 shots in the contest.

The Roadrunners came out on a mission in the first period, getting the first five shots on goal, including two scores by forward Hudson Fasching. Fasching deflected a blast from JJ Moser on the power-play, then found the back of the net with a breakaway wrist shot. Tucson killed off their first penalty of the night, and Cameron Hebig took the puck down to the other end for his first goal of the season. Tucson jumped out to a 3-0 lead, but San Diego got on the board late in the first to send the teams to the first intermission with the score sitting at 3-1. The Roadrunners ran into some penalty trouble in the second period, just as they had done the night before, and San Diego was able to capitalize. With 1:54 of five-on-three hockey at their disposal, the Gulls scored a pair of power-play goals less than a minute apart to even up the score at three. Tucson retook the lead with a goal by Ben McCartney, his fourth of the season. Hudson Fasching capped off his hat trick later in the period to extend the Roadrunners lead to 5-3. San Diego quickly got a goal back to cut the Roadrunners lead to one entering the final 20 minutes of play. The Roadrunners were up to the task of defending their lead in the third period, and even gave themselves some cushion with an insurance goal by Jan Jenik. Tucson killed off one final penalty in the third to come away with a 6-4 victory, improving to 3-3 on the season.

The Roadrunners head back out on the road to take on the Henderson Silver Knights for a pair of games Friday and Saturday night. Both games are slated to begin at 7:00 p.m. MST. Coverage starts at 6:45 on Fox Sports 1450AM with Roadrunners Warm-Up hosted by Jimmy Peebles. Then, “Voice of the Roadrunners” Adrian Denny will have all the action live from the Orleans Arena in Las Vegas.

Tucson Roadrunners Head Coach Jay Varady on the even-strength play from the Roadrunners in Saturday’s 6-4 victory against San Diego.

HERE’S ANOTHER HAT TRICK – Tucson Roadrunners forward Hudson Fasching recorded a hat trick in Saturday’s 6-4 win over the San Diego Gulls, but he wasn’t the first to do so on a Saturday night in Tucson this season. Ben McCartney accomplished the same feat in the team’s Home Opener against the Texas Stars one week prior.

Watch Tucson Roadrunners forward Hudson Fasching pick up all three of his goals in Saturday night’s 6-4 win over the San Diego Gulls. Fasching added an assist onto the already-impressive night and picked up the second-straight Saturday hat trick for Tucson, after Ben McCartney accomplished the feat last Saturday against Texas.

The Tucson Roadrunners invited fans to show up to Saturday’s matchup with the San Diego Gulls dressed in their Halloween costumes. After the game, fans were invited to trick-or-treat down on the ice with their Roadrunners-branded bags, the giveaway item of Saturday’s game.

Hockey and Hops Is November 13
Scroll to top