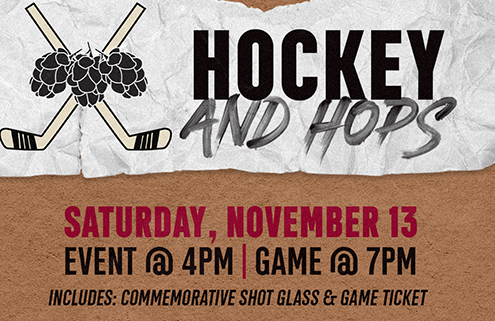 Tucson, Arizona – The Tucson Roadrunners, owned and operated by the Arizona Coyotes, will host Hockey and Hops Saturday, November 13 at 4 p.m. prior to their contest against Ontario at 7 p.m. from Tucson Arena.

Hockey and Hops will take place outside the arena in Eckbo Plaza. A game ticket that includes admission to the beer tasting event can be purchased HERE.

The event will feature over a dozen local Tucson breweries including:

All fans who attend Hockey and Hops will receive a Commemorative Shot Glass. Hockey and Hops coincides with the team’s Military Appreciation Night where the team will pay tribute to those who serve or have served in the Military while wearing Military Appreciation themed Kachina jerseys that will be auctioned off live after the game with proceeds going to Vet Tix. Vet Tix enriches the lives of our Military and Veterans by providing reintegration opportunities and family bonding experiences by providing free tickets to socially interactive events.

About the Roadrunners
Entering their sixth season owned and operated by the Arizona Coyotes as their AHL affiliate, the Roadrunners have welcomed over 500,000 fans to cheer them on at Tucson Convention Center since 2016. As proud members of the Southern Arizona community, the Roadrunners and Roadrunners Give Back, a branch of the Arizona Coyotes Foundation, take pride in supporting all community organizations with donations, volunteerism and public appearances by: Executives, Coaches, Players and the team’s Mascot Dusty. On the ice, the Roadrunners have secured Pacific Division Championships in two of their first four seasons. With the Coyotes and currently waiting to make his NHL debut, Cam Dineen will become the 40th Roadrunner to have played for both Tucson and the Coyotes since 2016.

Tucson Roadrunners Road Ahead: On The Road Again
Scroll to top