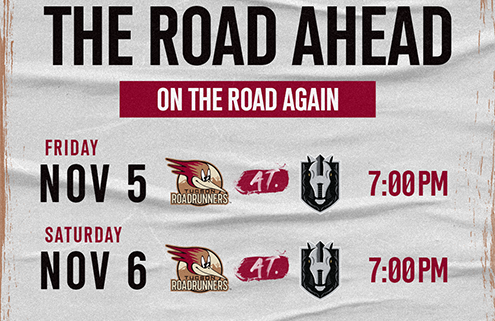 Tucson Roadrunners Road Ahead: On The Road Again

The Roadrunners will head out onto the road to face the reigning Pacific Division runners-up, the Henderson Silver Knights. The Knights enter the week with a 3-2-1 record, with all three wins coming at the Orleans Arena in Las Vegas. Tucson and Henderson squared off for three games in the preseason and Tucson won both games in Las Vegas to finish the preseason with a 2-1 record. Henderson will have a Wednesday night matchup with the Ontario Reign before they welcome the Roadrunners to their home ice on Friday.

When We Come Back…

The Roadrunners will be back home in two weeks when they take on the division-leading Ontario Reign at the Tucson Arena November 12 and 13. The pair of games Friday and Saturday will be filled with festivities both on and off the ice. Tickets for the weekend can be purchased HERE.

Military Appreciation Night is Saturday, November 13 at the Tucson Arena, when the Roadrunners take on the Ontario Reign. The team will debut their new Military Kachina Jerseys, one of seven sweaters the team will wear this season, featuring a digital camouflage pattern alongside the iconic Kachina logo and design.

Prior to Saturday’s Military Appreciation Night, the Roadrunners will also be hosting a Hockey and Hops event. Over a dozen local breweries will be in attendance for the sampling event, and fans can receive a commemorative Roadrunners-branded shot glass. The event will be at 4 p.m. MST before a 7 p.m. face-off. More information about Hockey and Hops can be found HERE.

Tucson Roadrunners in-game host Beef Vegan will have “Beef’s Cheap Seats” available at the Roadrunners next home game, Friday November 12. Fans can get 50-percent off tickets by listening for the code word on 102.1 KFMA, Tucson’s Rock Station, and clicking HERE to get the best deal in town.

The Roadrunners opened their home slate of games with four contests over two weekends at the TCC. Tucson began with a two-game series against the Texas Stars and followed up the next weekend with another pair of games, this time with the San Diego Gulls. The Roadrunners split each series to come away with a 2-2 record on the home stand. Goaltender Ivan Prosvetov, now in the NHL with the Arizona Coyotes, recorded his second-straight shutout to open the season in a 4-0 win over the Stars, and Josef Korenar picked up his first win in a Roadrunners uniform the next weekend with a 6-4 victory against the I-8 Border Rivals, the San Diego Gulls.

After three weekends of play in the AHL, the Roadrunners have had four players join the Arizona Coyotes in the NHL. Captain Dysin Mayo was the first, making his NHL debut and scoring his first career NHL goal in Glendale against the Edmonton Oilers. Goaltender Ivan Prosvetov, defenseman Cam Dineen, and forward Barrett Hayton all joined Mayo in the NHL soon after. Dineen’s first in-game action will be his NHL debut, and Prosvetov’s first victory will be career win number one at the NHL level.

Each weekend of the four-game home stand at the Tucson Arena saw a Roadrunners player record a hat trick. Forward Ben McCartney recorded his first professional hat trick on Saturday, October 23 against the Stars, and Hudson Fasching matched the feat the next Saturday against the Gulls. There have been four hat tricks in the AHL entering this week, and the Tucson Arena has seen two of them from the hometown Roadrunners.

Entering Tuesday, three teams in the AHL Pacific Division have an identical number of penalty minutes at 76, including this weekend’s matchup of the Roadrunners and Silver Knights. Tucson and Henderson also have the same number of goals allowed (18) through six games. The Bakersfield Condors are the third team with 76 minutes spent in the penalty box but have done so with one more game played than the Roadrunners and Knights.