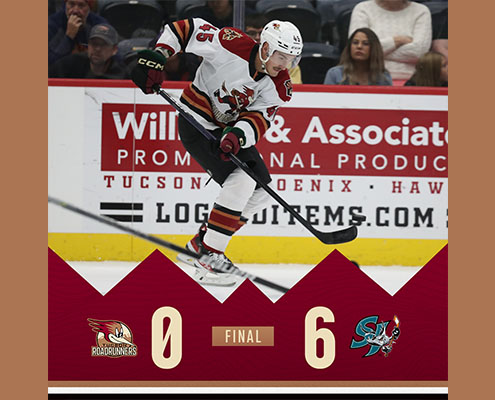 Tucson, Arizona – The Tucson Roadrunners wrapped up their six-game home stand at the Tucson Arena on Sunday with their second of two meetings with the San Jose Barracuda on the weekend. The Roadrunners fell to the AHL affiliate of the San Jose Sharks to split the two-game set and move to 8-5-1-0 on the year overall. Sunday was also Community Giving Day at the Tucson Arena, as the Roadrunners honored mural artist Alejandra Trujillo and collected hundreds of items to donate to local Tucson families for Thanksgiving Dinner.

Roadrunners forward Milos Kelemen laid a big hit on San Jose forward Scott Reedy in Sunday’s series finale with the Barracuda. The night before, Kelemen recorded a hat trick in a 6-3 come-from-behind win for Tucson. The 23-year-old from Slovakia has appeared in all 14 games for the Roadrunners and has recorded 11 total points (6g 5a).

SCORELESS STREAKS – The Roadrunners and goaltender Ivan Prosvetov held the Barracuda without a goal for the opening 27:35 of Sunday’s matchup at the Tucson Arena. Across the two-game weekend series, the Roadrunners shutout San Jose for a stretch of 71:20 from the first period of Saturday to the middle frame on Sunday. Prosvetov had previously kept San Jose scoreless for the final 47:14 of his first start of the season against the Barracuda on October 28 in San Jose, for an individual scoreless streak of one hour, 14 minutes and 49 seconds.

Sunday’s series finale with the San Jose Barracuda represented Community Giving Day at the Tucson Arena. The Roadrunners began by honoring local Artist Alejandra Trujillo, who painted a Roadrunners-themed mural at the Boys & Girls Clubs of Tucson on Grant Road. The team also collected frozen turkeys, canned goods, gift cards, and other non-perishable items to provide local Tucson families with Thanksgiving Dinners. In addition, Tucson Holiday Ice opened on Sunday outside the TCC, with a skating rink open to the public until mid-January.

“Every game is different, but we believe that we can beat everybody. We have to play simpler and faster, and we have to keep going to the next game.”

Tucson forward Milos Kelemen on the series split with the San Jose Barracuda at the Tucson Arena.

After a first period in the series opener with San Jose that featured four total goals and seven combined power-plays, the opening 20 minutes of Sunday’s contest was without a goal and saw only three trips to the man-advantage. Roadrunners goaltender Ivan Prosvetov stopped all 12 shots faced in the frame for his third-straight scoreless period against the Barracuda dating back to October 28 in the Golden State. San Jose broke the 0-0 tie with a pair of quick goals in the second period to take a 2-0 lead with 11:16 remaining in the middle 20 minutes of play. The Barracuda goals came just 1:09 apart, as they led for the first time since the final 1:11 of the second period in Saturday’s series opener. San Jose added to their lead with another pair of goals late in the middle frame to take their largest lead of the weekend at 4-0 as the teams entered the final period of play. The Barracuda came out in the third with their first power-play goal of the night to make it a 5-0 lead with 13:43 still to go in regulation. San Jose’s Thomas Bordeleau completed the hat trick with his second goal of the period with 3:13 still to play in regulation to make it a 6-0 advantage for the visiting team. The goal matched Bordeleau with Milos Kelemen’s three-goal performance in Saturday’s series opener for Tucson, and the sixth-straight goal for the Barracuda matched the scoring streak by the Roadrunners the night before. The Roadrunners came close to avoiding the shutout with a late power-play, but Barracuda backstop Eetu Makiniemi held on to stop all 28 shots faced in the series finale. Tucson will head out on a five-game road trip starting Wednesday, November 23, against the San Diego Gulls. That trips for the Roadrunners ends with another pair of contests with the Barracuda at the Tech CU Arena in San Jose.