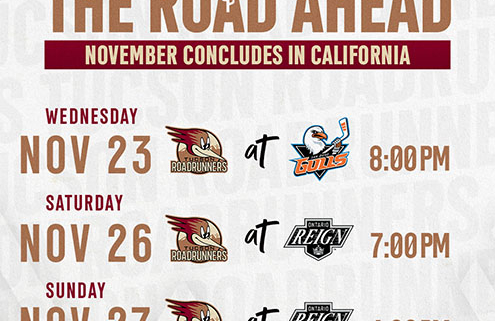 The 8-5-1-0 Roadrunners embark on a five-game road trip across the state of California, beginning on Wednesday, November 23, against the San Diego Gulls. The Roadrunners and Gulls will reignite their rivalry with the first of eight meetings on the season, with Tucson having won each of their last two matchups to close out the 2021-2022 campaign. San Diego enters the week with a record of 6-10-0-0 after winning their last contest on Saturday 6-1 over the Grand Rapids Griffins. After the midweek matchup with San Diego, the Roadrunners will head to Ontario to face the Reign for the first two times this season Saturday, November 26 and Sunday, November 27. Entering the week, the Roadrunners and Reign are tied for the second-most points in the AHL’s Pacific Division with near-identical records of 8-5-1-0 for Tucson and 8-5-0-1 for Ontario.

The Roadrunners had a home stand filled with festivities and events for the Tucson community. The first weekend of the six-game stretch at the Tucson Arena featured Military Appreciation Night, as the team wore Military Specialty Jerseys on Saturday, November 12, against the Coachella Valley Firebirds. The jerseys were auctioned off after the contest to raise nearly $30,000, with all proceeds going to VetTix, an organization that provides tickets to sporting events, concerts, performing arts and family activities aimed at improving mental welfare and enriching the lives of military service members and veterans. The following Saturday against the San Jose Barracuda was Hockey Fights Cancer Night, as the Roadrunners debuted their new White Kachina Alternate Jerseys and stood for all those who fight cancer. The home stand concluded on Sunday, November 20, with Community Giving Day. The Roadrunners honored mural Artist Alejandra Trujillo and received hundreds of items to donate to Tucson families for their Thanksgiving Dinners.

The Roadrunners six-game home stand at the Tucson Arena was highlighted by back-to-back wins where Tucson scored six goals. 12 different Roadrunners recorded a point in Wednesday’s 6-2 victory over the Henderson Silver Knights, while 11 skaters made their way onto the stat sheet in Saturday’s 6-3 triumph over the San Jose Barracuda. The pair of games represent the first time the Roadrunners have scored at least six goals in consecutive contests since December 20 and 21 of 2019.

Tucson is currently tied for the second-most standings points in the AHL’s Pacific Division (17), and the third-best winning percentage at .607. The Roadrunners are 4-2-0-0 on the road this season, outscoring their opponents 18 to 15. Tucson’s next opponent, the San Diego Gulls, are 2-5-0-0 at home so far this season with an average of just 5.43 combined goals per-game across their seven home contests.

The Roadrunners made a habit of scoring early in games on their recent home stand. In a three-game stretch from Saturday, November 12 to Wednesday, November 16, the Roadrunners scored four goals in the opening 4:22 of each contest. Tucson Captain Adam Cracknell even set a franchise record for the fastest goal to start a game against Coachella Valley with a score just 10 seconds into the first period on Saturday, November 12. Tucson also tallied their second four-goal period of the season in the opening frame of Wednesday’s 6-2 win over the Henderson Silver Knights.

First-year Roadrunners forward Milos Kelemen had his best performance of the early 2022-2023 campaign Saturday night when he recorded a hat trick to lead Tucson to a 6-3 come-from-behind win over the San Jose Barracuda. Kelemen lit the lamp for both the equalizer and eventual game-winning goals, before an empty-net strike capped off the hat trick and a big Tucson victory. The 23-year-old has appeared in all 14 games for the Roadrunners this season and has amassed 11 points (6g 5a) in his first professional season in North America.

Third-year Roadrunner Mike Carcone is off to another great start in 2022-2023 after setting a franchise record for goals in a season last year with 24. Through 14 games, Carcone has tallied 19 total points (6g 13a), which is tied for the fifth-most in the American Hockey League. His 1.36 points per-game is the sixth-most in the league among players with at least ten games played. The 26-year-old increased his numbers across the board between his first and second seasons in the desert and is on pace to set career highs for assists and total points after doing so last season with 17 assists and 41 points overall. By comparison, Carcone has already notched 13 assists through 14 outings this year and appeared in 48 total games with Tucson last season.

Tucson Roadrunners Happy Hour airs every Tuesday at 5 p.m. on FOX Sports 1450AM and the iHeartRadio app, with a podcast version also available after each episode on the iHeartRadio app. This week, co-hosts Adrian Denny, Brett Fera, and Kim Cota-Robles will be joined by Roadrunners Team President Bob Hoffman. In addition, a new episode of the Tucson Roadrunners Insider Podcast released on Sunday that looked back on the Roadrunners six-game home stand and previewed the upcoming five-game road trip. “Voice of the Roadrunners” Adrian Denny and TucsonRoadrunners.com’s Jimmy Peebles also discussed the recent performances of Milos Kelemen with Tucson and Matias Maccelli with the Arizona Coyotes. The podcast can be found on the iHeartRadio App.