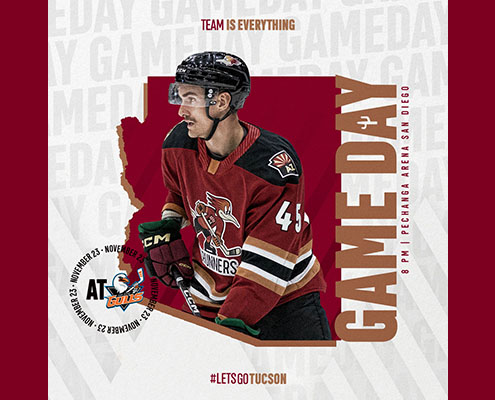 The 8-5-1-0 Tucson Roadrunners head out on the road to begin a five-game road trip across the state of California. The first stop on the trip is Wednesday night at the Pechanga Arena in San Diego, as Tucson will take on the 6-10-0-0 San Diego Gulls for the first time this season to reignite the I-8 Border Rivalry. The Roadrunners take a nearly identical roster into the start of the road trip, with the only recent move being that the Arizona Coyotes have assigned forward Liam Kirk from the Roadrunners to the Atlanta Gladiators of the ECHL.

Three Things
1) The Roadrunners enter the midweek matchup with San Diego having won two of their last three contests to close out a six-game home stand at the Tucson Arena. Tucson’s 17 standings points are tied for second in the AHL’s Pacific Division, and their 3.21 goals per-game average is the second highest in the Division behind Calgary and Coachella Valley. Meanwhile, the Gulls are one of two teams in the Pacific Division with a sub-.500 winning percentage (Henderson) but are coming off a strong 6-1 win over the Grand Rapids Griffins. The matchup between Tucson and San Diego is the third game on the Gulls current four-game home stand, and the first stop on the Roadrunners five-game road trip that will take them to San Diego, Ontario and San Jose.

2) Tucson and San Diego are meeting Wednesday night for the first time since the final three games of the 2021-2022 campaign. The Roadrunners ended last season on a two-game win streak with back-to-back victories over the Gulls at the Tucson Arena. The first of two Roadrunners wins was fueled by a three-point night from Colin Theisen (1g 2a) and a four-goal second period by Tucson for a final score of 6-2. The season finale the following night was a back-and-forth 3-2 shootout win for the Roadrunners, as Colin Theisen scored one of two shootout goals and backstop Ivan Prosvetov went two-for-two against the Gulls in the shootout to finish 2021-2022 on a high note.

3) Third-year Roadrunners forward Mike Carcone has put up impressive individual performances against Tucson’s I-8 Border Rival since arriving to the desert in 2020-2021. While he wasn’t with Tucson for their final four contests against the San Diego Gulls last season due to his call-up to the Arizona Coyotes, Carcone scored five goals across a pair of outings in San Diego on February 4 and 5 of 2022. His three-goals in the 5-4 Roadrunners win to close out the series marked his first of two hat tricks in February 2022, and the weekend performance earned him his second career AHL Player of the Week honors. Carcone’s first AHL Player of the Week nod came in April of 2021 after he went off for six goals in two games against the Gulls. Carcone tallied 11 total points (7g 4a) across Tucson’s final four meetings of the season with San Diego in 2020-2021, his first year at a Roadrunner.

“They’re a team that is looking for answers themselves, and I know they’re not satisfied with their start to the season. They’re going to be a hungry team that wants to take us down.”

Tucson Head Coach Steve Potvin on the upcoming matchup with their I-8 Border Rivals, the San Diego Gulls.

Number to Know
3.5 – The average goals per-game scored by the Roadrunners in eight games with the San Diego Gulls last season. Tucson tallied 5 or more goals in a game three times against the AHL affiliate of the Anaheim Ducks, tied with the Ontario Reign for the most 5+ goal games against a single opponent in 2021-2022. As for this year, Tucson’s overall average of 3.21 goals per-game edges out San Diego’s 3.06 goals per-game average so far.

We’re Doing It Live
Tonight’s game will be broadcast on AHLtv, as well as on the radio on FOX Sports 1450AM and the iHeartRadio app. Coverage will begin at 7:45 p.m. with Roadrunners Warm-Up hosted by Jimmy Peebles, before “Voice of the Roadrunners” Adrian Denny has all the action from the Pechanga Arena.