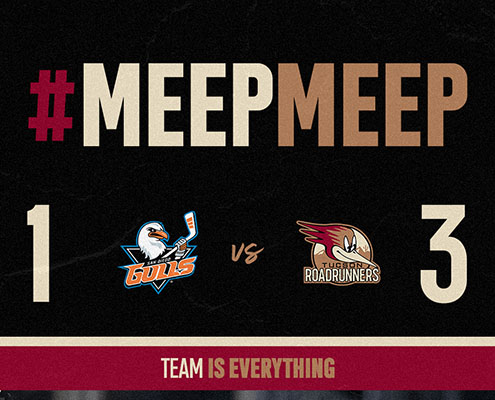 San Diego, California – The Tucson Roadrunners took on their I-8 Border Rivals, the San Diego Gulls, for the first time this season Wednesday night at the Pechanga Arena in San Diego. The Roadrunners led for the final 53:05 of the contest to come away with a 3-1 win over the Gulls to improve to 9-5-1-0 on the season. Tucson goaltender Ivan Prosvetov earned his sixth win of the season with 30 saves, as he kept the AHL affiliate of the Anaheim Ducks off the scoreboard for the opening 57:36 of Wednesday’s matchup.

Roadrunners forward Ben McCartney opened the scoring in Wednesday’s 3-1 win over the San Diego Gulls with his third goal in the last five outings. The score put Tucson up 1-0 with 6:55 gone by in the first period, as the Roadrunners led the rest of the way to earn the win in the first meeting of the season with San Diego.

THREE FOR THREE – With Wednesday’s 3-1 victory, the Roadrunners have won three-straight matchups against the San Diego Gulls dating back to the final two games of last season. With a goal in the first period, forward Jan Jenik extended his active point streak against San Diego to five games, while Mike Carcone’s assist extended his scoring streak against the Gulls to three games.

Wednesday’s 3-1 Roadrunners win over the San Diego Gulls was highlighted by performances by goaltender Ivan Prosvetov and forward Ben McCartney. Prosvetov posted his second-best save percentage of the season at .968 to earn his sixth win of the season, as he stopped 30 of 31 shots faced. McCartney opened the scoring Wednesday night with a goal 6:55 into the contest for his third goal in five games. The 21-year-old has four points (1g 3a) in as many outings against San Diego dating back to March 23, 2022.

“That was great work from the whole line. We pushed the pressure to the net, I tried to take a shot and it went in.”

Tucson forward Jan Jenik on his goal in the first period of Wednesday’s 3-1 win over the San Diego Gulls. The goal represented Jenik’s second of the season and the eventual game-winning score.

The first goal between the I-8 Border Rivals in 2022-2023 went to the Roadrunners and forward Ben McCartney, as the 21-year-old lit the lamp for the third time in five games to give Tucson a 1-0 lead 6:55 into the contest. Tucson extended their lead just under five minutes later with a goal from the middle of the San Diego zone by Jan Jenik for his second tally of the season. Despite being narrowly outshot nine to eight in the opening frame, the Roadrunners carried their 2-0 advantage into the first intermission at the Pechanga Arena. Tucson continued to operate in the middle frame as they did in the first period of play, as they once again limited the Gulls to nine shots and outdrew them in trips to the power-play two to one. The Roadrunners increased their shots on goal in the frame to 13, but the second period was without a goal to preserve a 2-0 score in favor of Tucson going into the final 20 minutes of play. Still leading by a pair, Tucson’s advantage from the opening 6:55 of the game was challenged near the midway point of the third period by an extended five-on-three situation in favor of the Gulls. The Roadrunners and Prosvetov were able to fend off the pair of penalties, as Tucson and San Diego pulled even in power-play chances at four trips apiece to the man-advantage. The Gulls pulled netminder Lukas Dostal with just over three minutes remaining in regulation as they looked for a pair of goals to even up the score. Their first score of the night with 2:24 on the clock got them halfway to a tie game, but an empty-net strike from the opposite end of the ice by J.S. Dea with one second left in the contest secured a 3-1 win for Tucson. The Roadrunners will continue their five-game road trip with a two-game set against the Ontario Reign on Saturday and Sunday from the Toyota Arena.

1-On-1 With Bob Hoffman
Scroll to top