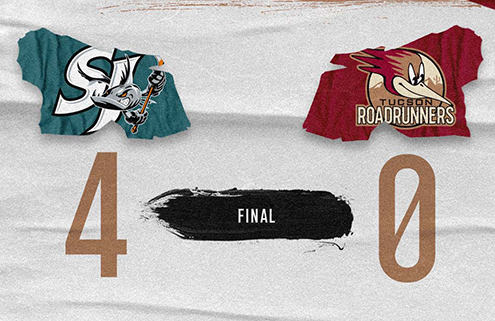 Tucson, Arizona – The Tucson Roadrunners opened a three-game series at home Wednesday night as they hosted the San Jose Barracuda for the first time since the opening weekend of the 2020-2021 campaign. Tucson and San Jose combined for 114 penalty minutes and five total fights, as the Barracuda took the series opener by a score of 4-0. Ivan Prosvetov was in net for his second start of the season against San Jose, as he stopped 34 shots faced.

Watch Roadrunners forward Tyson Empey drop the gloves with San Jose’s Zachary Gallant in Wednesday night’s DentalPros Hit of the Game. The bout marked Empey’s eighth fight of the season, tying him with linemate Boko Imama for the team lead. The fight was the first of five in Wednesday night’s contest, setting a new season-high for most in a game for Tucson.

GETTING SHOTS ON GOAL – The Roadrunners rifled off 40 shots on goal in Wednesday’s contest with the San Jose Barracuda, matching a season high. Tucson previously tallied 40 shots on Saturday, January 29, as they defeated the Bakersfield Condors in overtime by a score of 3-2. The Roadrunners 17 shots in the second period were the most in a middle frame this season and is tied for fourth most in any period this year.

Tucson Roadrunners forward Stephen Baylis dropped the gloves with San Jose’s Steen Pasichnuk for the fifth and final fight in Wednesday’s clash with the Barracuda. The game was Baylis’ fifth outing with the Roadrunners this season, as the 27-year-old leads the ECHL’s Rapid City Rush in goals this year with 22.

“I think it comes down to staying locked in for the full time, communicating on the bench and making sure we’re doing everything we can to stay in the game… Guys were sticking up for each other and I think we have a lot of guys that will do anything they can to fight for each other.”

Roadrunners defenseman Quinn Wichers on Wednesday’s matchup with the San Jose Barracuda. The game marked Wichers’ 12th appearance with Tucson on the season.

San Jose struck first with a goal just 57 seconds into the contest to take a 1-0 lead. The goal flipped the script from Tucson’s last meeting with the Barracuda on March 6, when the Roadrunners opened the scoring 3:42 into the opening frame. The next action came with just 3:55 still to play in the period, when defenseman Cam Crotty took a hard hit from San Jose’s Zachary Gallant. Tyson Empey took exception to the hit on his teammate and dropped the gloves with Gallant for his eighth bout of the season, tying him with linemate Boko Imama for the team lead. After scoring in the first minute of the opening period, the Barracuda added another goal in the final minute of the frame to extend their lead to 2-0. The goal was scored by former Roadrunner Lane Pederson in his first trip to the Old Pueblo as a member of the opposition. Tucson entered the second period trailing by a pair of goals but led in shots 15 to eight with each of the first three trips to the man-advantage. The Barracuda opened the scoring in the second period with a goal 2:39 into the middle frame, pushing their advantage to 3-0. San Jose added another in transition at the midway point of the period to make it a 4-0 game in their favor. Both goals for the Barracuda in the second period were scored by Jake McGrew. The Roadrunners responded to another hard hit by the Barracuda with a fight in the final 3:17 of the middle frame. Travis Barron answered for linemate Terry Broadhurst as he took on San Jose’s Jasper Weatherby, marking his third bout of the year. The third period action began with the third fight of the contest 4:41 into the frame. This time it was Jan Jenik getting into it with San Jose’s Jake McGrew for his third time dropping the gloves this season. The bout also made Wednesday’s matchup the first game this season to feature a fight in all three periods. It took another 3:23 for Tucson to tie the record for most fights in a game this season with their fourth bout of the night. Cedric Lacroix took on Montana Onyebuchi for his third fight since joining the Roadrunners in January. Tucson and San Jose continued to play a physical game, with a fifth and final fight taking place between Stephen Baylis and Steenn Pasichnuk. The Barracuda came away with the win less than two minutes later by a score of 4-0.

The Roadrunners will have a day off Thursday before continuing their series with the San Jose Barracuda Friday night. The matchup to kick off the weekend is set to face-off at 7:00 p.m. MST, with coverage beginning at 6:45 p.m. MST on Fox Sports 1450AM with Roadrunners Warm-Up hosted by Jimmy Peebles. Then, “Voice of the Roadrunners” Adrian Denny will have all the action live from the Tucson Arena.

RRTV In The Community: Battle of the Badges
Scroll to top