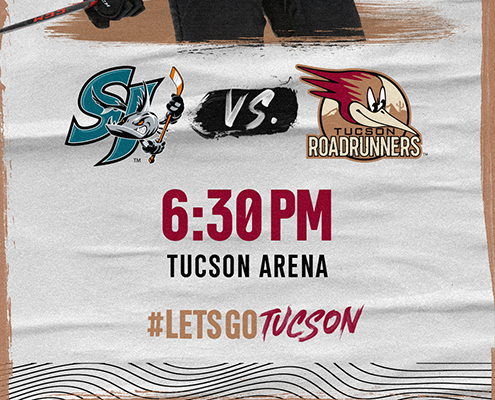 The Tucson Roadrunners return home for the first time in March for a three-game set with the San Jose Barracuda. 11 of the Roadrunners final 19 regular season games will take place at the Tucson Arena, beginning with a Wednesday night matchup against San Jose. The week with San Jose will wrap up the season series between the Roadrunners and the San Jose Sharks AHL affiliate, after having already met three times at the SAP Center in San Jose earlier this year. The Roadrunners won the first meeting of the 2021-2022 season between these teams on Wednesday, January 12, as they netted a pair of power-play goals in a 4-3 come-from-behind victory on the road. Four skaters have faced off against both the Barracuda in the AHL and Sharks in the NHL this season in San Jose. Mike Carcone made his NHL debut against the Sharks while Jan Jenik, Blake Speers and Cam Dineen also took the ice on December 28 at the SAP Center.

Tonight, we are going green in advance of Thursday’s St Patrick’s Day with 1,500 Green Beads distributed to the first 1,000 fans entering the arena courtesy of Williams & Associates. Our concessions special tonight will be Corned Beef Sliders with Cabbage and Potatoes. 16 ounce Green Draft Beers will also be available for $5.

Three Things
1) The Roadrunners will be hosting the Barracuda at the Tucson Arena for the first time since the opening weekend of the 2020-2021 season on February 7 and 8, 2021. The Roadrunners are 10-0-2 at the Tucson Arena against the Barracuda dating back to March 20, 2018. The stretch includes the opening weekend of the 2020-2021 season, when Tucson got off to a 2-0 start with back-to-back wins against the Barracuda. The Roadrunners were the designated “away” team but played the series at the Tucson Arena. Over the opening weekend, goaltender Ivan Prosvetov allowed only four goals on 73 total shots for the first two of his four-straight wins to begin the 2020-2021 campaign. Also during this span were the 2018 Calder Cup Playoffs, when Tucson outscored the Barracuda 9-0 in two games at home on their way to a 3-1 series victory in the first round.

2) Tucson returns to their home ice after a five-game road trip to begin the month of March. During the trip, the Roadrunners concluded their season series with the Ontario Reign, Bakersfield Condors and Texas Stars. Tucson struck first in four of the five contests and set the franchise record for fastest goal to start a game in team history twice. Mike Carcone began the road trip with a goal just 22 seconds into the first period against Ontario, before defenseman Cole Hults broke the new record just 10 days later with a goal 18 seconds into the series finale with Texas on March 12. The Roadrunners also scored late in games, as they netted a game-tying power-play goal in each contest with the Texas Stars to round of the trip, including one by Travis Barron with just 39 seconds left in regulation to force overtime. In the middle of the trip, Carcone tied the Roadrunners franchise record for goals in a season in a Sunday, March 6 matchup against San Jose, when he lit the lamp for the 23rd time this season to open the scoring 3:42 into the first period.

3) Joining the Roadrunners ahead of the crucial three-game series with San Jose are forward Stephen Baylis and defenseman Quinn Wichers. Both arrive from the Rapid City Rush of the ECHL, with a combined 15 games already played this year for Tucson. Baylis leads Rapid City in goals with 22 and is second overall in points with 44. Wichers has 11 appearances with Tucson this season and will be making his fifth separate stint with the Roadrunners. The moves come after forward Mike Carcone and defenseman Cam Dineen were recalled to the Arizona Coyotes Monday morning. Carcone appeared in Arizona’s game with the Ottawa Senators on Monday, as he skated alongside Tucson linemate Matias Maccelli. The Coyotes defeated the Senators 5-3, as former Roadrunner Lawson Crouse recorded his first career NHL hat trick.

“I think the leadership group has done a good job of sticking with this process. It’s always tough when you’re not getting the results, but I think everybody is starting to buy in. We definitely have to find a way to get some points here, but we’ll just keep working every day.”

Roadrunners forward Terry Broadhurst on the team’s energy as the Pacific Division playoff race heats up.

Number to Know
6 – The number of points by forward Jan Jenik in six career outings against the San Jose Barracuda. Jenik has three goals and three assists against San Jose dating back to the first points of his career on February 8, 2021, when he tallied a goal and an assist in a 5-3 win. The 21-year-old finished his rookie season with a goal against the Barracuda in the 2021 Pacific Division Playoffs, and even scored the first two goals of his NHL career against their parent club, the San Jose Sharks.

We’re Doing It Live
Tonight’s game will be broadcast on AHLtv, as well as on the radio on Fox Sports 1450AM or on the iHeartRadio app. Coverage begins at 6:15 p.m. MST with Roadrunners Warm-Up, as Jimmy Peebles gets you ready for the game before “Voice of the Roadrunners” Adrian Denny has the call at 7:00 p.m. live from the Tucson Arena.

Followon TwitterSubscribeto RSS Feed
Tucson Roadrunners Road Ahead: Back Home With The Barracuda