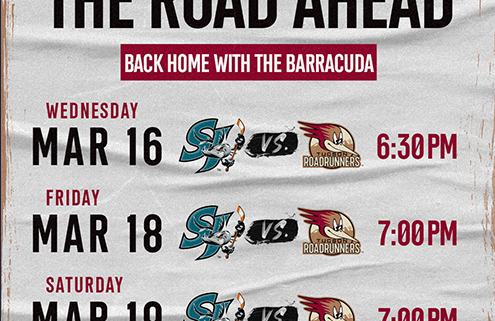 Tucson Roadrunners Road Ahead: Back Home With The Barracuda

The Roadrunners return to Tucson for the first home games in the month of March. They’ll play host to the San Jose Barracuda at the Tucson Arena for the first time since the opening weekend of the 2020-2021 season. The Roadrunners have faced the Barracuda three times this season, most recently on Sunday, March 6. In the game, forward Mike Carcone scored for the 23rd time this season to match a franchise record for goals in a season. Tucson has won seven of their last eight meetings with San Jose on home ice, dating back to the 2018-2019 season.

A Series Of Celebrations

The Roadrunners have 11 home games remaining in the regular season, with the next three taking place from Wednesday, March 16 to Saturday, March 19. The three-game set against the San Jose Barracuda will be jam-packed with fun for all fans, beginning with Go Green Night on March 16 at 6:30 p.m. MST. The first 1,000 fans to the game will receive St. Patrick’s Day-Themed Green Beads courtesy of Williams & Associates, and all fans can enjoy a Concession Special of Corned Beef Sliders, Cabbage, and Potatoes, as well as a drink special of a 16 ounce green Draft Beer for $5. The food specials will continue on Friday, March 18 with another 3-2-3 night for the family. The Tucson Arena will be offering $3 Hot Dogs, $2 Soft Drinks and $3 Draft Beers to help celebrate First Responders Night and Ladies Night. Friday at the Tucson Arena features a hockey doubleheader, as the Tucson Police Department and Tucson Fire Department will face off in a friendly exhibition at 4 p.m. before the Roadrunners 7 p.m. matchup with San Jose. Tickets purchased for the Roadrunners contest will be good for both games. Rounding out the weekend will be Hockey is For Everyone Night presented by O’Rielly Chevrolet on Saturday, March 19. The first 1,500 fans will receive a Dusty Poster upon entrance, with special Hockey is For Everyone and Family ticket packs available to purchase. The Hockey is For Everyone pack includes a ticket, a $5 Concessions Voucher and a Hockey is For Everyone T-Shirt, while the Family Pack includes four tickets and $20 in Concessions Vouchers for $40 in savings. For more information on the fun-filled weekend and to purchase tickets, click HERE.

Tucson wrapped up their season series against the Texas Stars last weekend in the Lone Star State. The Roadrunners earned a standings point in the series finale, a 3-2 overtime defeat. Tucson forced the extra three-on-three overtime period with just 39 seconds remaining in regulation, when forward Travis Barron scored the equalizer on the Roadrunners first and only power-play of the contest. Tucson’s power-play unit finished the weekend with two goals in just four opportunities, the best power-play percentage in a two-game series on the season.

Caught Speeding On The Road Trip

The Roadrunners started and ended their five-game road trip by setting the same team record. On March 2 in Ontario, Mike Carcone got Tucson on the board just 22 seconds into the first period, marking the fastest goal to start a game in franchise history. The new record only stood for 10 days, as defenseman Cole Hults opened the scoring for the Roadrunners with 18 seconds gone by in the opening frame on March 12 in Texas.

Last weekend against the Texas Stars, forward Jan Jenik became the second Roadrunner to reach 20 assists on the season with a point in the series opener Friday. Jenik is one of two players this season to tally 15 goals and 15 assists and is the active team leader for goals, assists and power-play goals. The second-year skater has as many point streaks of four games as consecutive outings without a point on the season (three).

Rookie forward Matias Maccelli has made an immediate impact in the NHL with the Arizona Coyotes. The Coyotes were undefeated in Maccelli’s first four contests, beginning with his National Hockey League debut on March 3. The 21-year-old has recorded four points (1g 3a) in his first six outings, including a two-assist performance on March 10 in Toronto. Maccelli’s second assist in that game came on the overtime game-winning goal by Jakob Chychrun. Arizona is 5-1 since the recall of Maccelli.

Carcone And Cam To The Coyotes

The Arizona Coyotes announced Monday morning that they had recalled forward Michael Carcone and defenseman Cam Dineen. The move marks the second call-up of the season for both Carcone and Dineen. The 25-year-old Carcone made his NHL debut with the Coyotes on December 28, 2021 in San Jose. Dineen was also in the Coyotes lineup for his 12th of 14 appearances with Arizona on the season, after making his National Hockey League debut on November 5. Also back with the Roadrunners after a game with the Arizona Coyotes is Captain Hudson Fasching. Fasching skated alongside former Roadrunners Matias Maccelli and Lawson Crouse on March 12 against the Boston Bruins.

Defenseman Cole Hults notched his second multiple-point performance of the season in Tucson’s last game on Saturday, March 12 against the Texas Stars. The 23-year-old tallied a goal and an assist while paired alongside fellow Wisconsin native Ty Emberson. Hults has stepped into a larger role with the Roadrunners as the season has gone on, leading all active Tucson defensemen in goals with four.