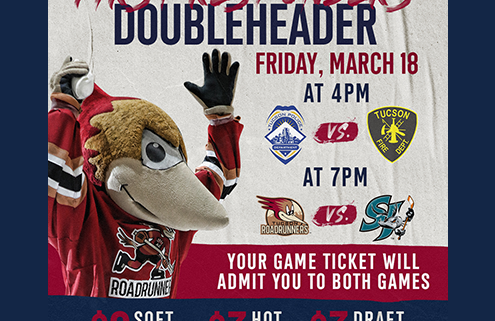 Tucson, Arizona – The Tucson Roadrunners, owned and operated by the Arizona Coyotes, will host an action-packed week of hockey and fun when they play San Jose Wednesday at 6:30 p.m. and Friday and Saturday at 7 p.m. from Tucson Arena.

The week begins with the team Going Green on Wednesday followed by First Responders Night Friday and Hockey Is For Everyone Saturday.

Wednesday, green beads will be given to the first 1,000 fans from Williams & Associates; plus Corned Beef Sliders with Cabbage and Potatoes and $5 16-Ounce Green Draft Beers will be available at the Concessions Stands.

Friday, the Tucson Police Department and Tucson Fire Department will begin the doubleheader of hockey at 4 p.m. with a game against each other before the Roadrunners host San Jose at 7 p.m. as the two organizations raise money for the Erik Hite Foundation and I Am You 360. A ticket for Friday night is good for both games and can be purchased at TucsonRoadrunners.com/Badges. At both games fans will be able to take advantage of $2 Soft Drinks, $3 Hot Dogs and $3 Draft Beers. Outside the arena, there will be a variety of police cars, fire trucks and ambulances on display. Sparky the Fire Dog and McGruff the Crime Dog will join Roadrunners Mascot Dusty for fun as well. The team is also excited to welcome the following groups to the game Friday: Hearts of Gold, Tucson Firefighters Association, Golden Ranch Fire, United States Border Patrol Tucson Sector.

The team and forward Boko Imama will also continue to sell the “Enough Is Enough, All For All For All” t-shirts that advocate an end to racism and inclusion for everyone with all proceeds going to the Hockey Diversity Alliance this week too. The t-shirts are $25 and can also be purchased at TucsonRoadrunners.com/HDA.

Tucson Roadrunners Road Ahead: Back Home With The Barracuda
Scroll to top