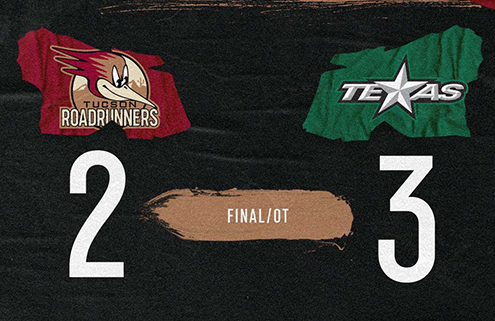 Cedar Park, Texas – The Tucson Roadrunners wrapped up their five-game road trip Saturday night, with the second of two meetings with the Texas Stars at the H-E-B Center. Tucson once again jumped out to an early lead, before falling behind 2-1 in the third period. The Roadrunners tied the game at 2-2 with just 39 seconds remaining in regulation but fell in overtime by a score of 3-2. Goaltender Ivan Prosvetov tallied 22 saves for Tucson in his ninth-straight appearance, and fourth start against Texas on the season.

Watch Tucson Roadrunners forward Travis Barron score on the power-play late in the third period of Saturday’s matchup with the Texas Stars. The goal was Barron’s first power-play strike of the season and sent the series finale with Texas to overtime. Defenseman Cole Hults recorded an assist on the goal for his second multi-point outing of the year.

HULTS HUSTLES FOR A GOAL – Tucson defenseman Cole Hults set a new Roadrunners franchise record for fastest goal to start a game Saturday night against the Texas Stars. The score came just 18 seconds into the first period, breaking the previous record set by Mike Carcone in the first game of the road trip on March 2. The 23-year-old leads all active Tucson defensemen in goals with four.

Tucson Roadrunners defenseman Cam Crotty battles in the defensive zone in Saturday night’s series finale with the Texas Stars. Crotty finished the contest with a plus-one for his third-straight outing of an even or better.

“I thought we played really hard, not only tonight but the whole weekend. That’s the Roadrunners hockey that we have. Unfortunately, we didn’t get the points but we’ll take one tonight. That’s huge moving forward for this playoff. We’ll take it with a grain of salt, move forward, and keep playing how we did.”

Roadrunners forward Travis Barron on the strong effort by Tucson to force overtime with the Texas Stars in Saturday night’s matchup at H-E-B Center in Cedar Park.

The Roadrunners continued their trend of setting the tone early, as they opened the scoring for the seventh time in eight games. The goal was scored just 18 seconds into the contest by Cole Hults for his fourth of the season, leading all active Tucson defenseman. The score also set a Roadrunners franchise record for the fastest goal to open a game, breaking the previous record of 22 seconds accomplished by Mike Carcone in the first game of the road trip on March 2. The rest of the opening frame featured the usual high energy and physicality brought in meetings between Tucson and Texas, but the score remained at 1-0 for the start of the second period. After the fastest goal to start a game in Roadrunners history, the following 35:11 of action was without a goal. The Stars snapped that streak with a goal on their fourth power-play of the contest. The man-advantage came after Boko Imama’s team-leading eighth fight of the season for Tucson, as he took on Alex Petrovic for the Stars. Overall, Texas went on each of the first five power-plays in the game. The Stars took their first lead of the night with 13:23 remaining in the third period, their first five-on-five goal in the contest. With just 39 seconds left to play in regulation and their own net empty, Travis Barron scored on Tucson’s first power-play of the game to tie the score at 2-2. The final 39 seconds were without a goal, as Tucson and Texas headed to overtime for the first time since the Second Round of the 2018 Calder Cup Playoffs. With 1:18 still to play in the extra three-on-three period, Texas buried the overtime game winner for their second-straight 3-2 victory over Tucson.

The Roadrunners will return home for a three-game set with the San Jose Barracuda. The series opener is set for Wednesday, March 16 at 6:30 p.m. MST, with coverage beginning at 6:15 p.m. MST on Fox Sports 1450AM with Roadrunners Warm-Up hosted by Jimmy Peebles. Then, “Voice of the Roadrunners” Adrian Denny will have all the action live from the Tucson Arena.

Hockey For Everyone, First Responders Night, Going Green All Week
Scroll to top