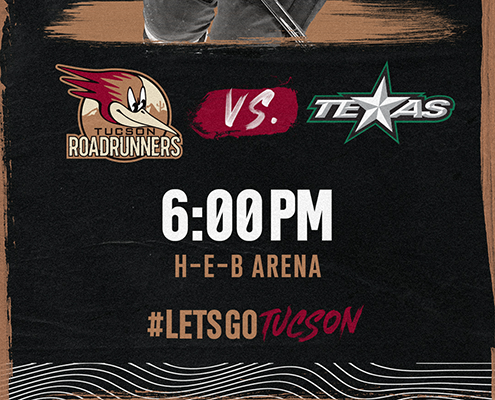 The Tucson Roadrunners finish off their five-game road trip Saturday night with a rematch against the Texas Stars. The series finale at the H-E-B Center will face-off at 6:00 p.m. MST, as Tucson will look to even up the weekend series at 1-1 and the overall season series with Texas at two wins apiece. Saturday’s game ends a stretch of nine out of Tucson’s last 13 contests taking place on the road, with the Roadrunners not going back out on the road for more than three consecutive matchups for the rest of the regular season.

Three Things
1) The Roadrunners and Stars engaged in another back-and-forth battle in the series opener Friday night. Texas came away with a 3-2 win, but Tucson had positive takeaways from the first matchup against the Stars in 138 days. The Roadrunners opened the scoring for the sixth time in their last seven contests, getting on the board just 4:37 into the first period. Despite giving up a pair of goals in quick succession to start the middle frame, Tucson was able to quickly answer back. Roadrunners Head Coach Jay Varady called a timeout to regroup, followed by a goal just 26 seconds into their first man-advantage of the night and 2:03 after Texas took the lead. Tucson continued to play physical to match the energy of the Stars in front of their Texas crowd, with hard hits from usual suspects Boko Imama and Tyson Empey and young defensive prospects Cam Crotty and Ty Emberson. After the pair of goals in the middle frame, the Roadrunners defense held the Stars scoreless for the next 34:07.

2) Scoring both goals for Tucson in Friday’s series opener were defenseman Cam Crotty and forward Cam Hebig. Crotty’s score was his second of the season and the 22-year-old has an overall plus-minus of 2 in three outings against the Stars this season. Hebig’s power-play strike was his 11th goal of the year, matching a career high for goals in a season from his 2018-2019 rookie campaign. The score was assisted by defenseman Cam Dineen, the third and final Cam to appear on Friday’s score sheet. Dineen leads all Roadrunners defensemen in assists (16) and overall points (13), while leading the active Tucson roster in points per-game (.95). The 23-year-old has elevated his game to new heights this season, setting career highs for assists, points and power-play goals with the fewest number of games played (20).

3) Tucson forward Jan Jenik recorded his 20th assist of the season in the opening frame Friday night against Texas in his first trip to the Lone Star State. Jenik became the third Roadrunner to reach 35 points on the season and second to tally at least 15 goals and 15 assists. The second-year skater leads the Tucson active roster in assists, is tied with Mike Carcone for most power-play goals (8) and is just three points behind Carcone for the active team lead in points at 35. Jenik is the only Roadrunner with a point in all three games against Texas this season (1g 2a) and has 10 points (4g 6a) in his last eight overall outings with Tucson.

“It’s playoff mentality for us. It’s the last stretch here and we’re trying to make our push. I think it’s my job to lead the way when it comes to getting on the forecheck and getting the boys going.”

Roadrunners forward Boko Imama on Tucson’s approach to each game, as well as his role in making a push for the playoffs.

Number to Know
13 – The number of times after Friday’s contest that the Roadrunners have gone shorthanded two times or less in a game this season. Despite the physicality of Tuesday’s game, the Roadrunners maintained their discipline and went shorthanded just twice in the series opener. 10 of those 13 games have taken place on the road, including seven since the start of 2022.

We’re Doing It Live
Tonight’s game will be broadcast on AHLtv, as well as on the radio on Fox Sports 1450AM or on the iHeartRadio app. Coverage begins at 5:45 p.m. MST with Roadrunners Warm-Up, as Jimmy Peebles gets you ready for the game before “Voice of the Roadrunners” Adrian Denny has the call at 6:00 p.m. live from the H-E-B Center.