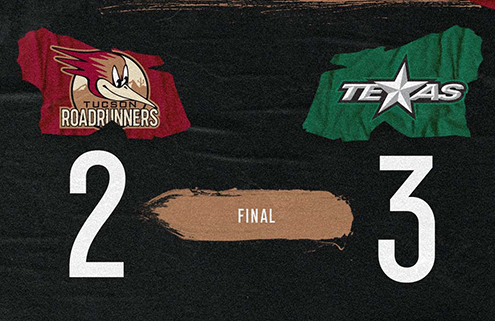 ROADRUNNERS FALL BEHIND LATE IN SERIES OPENER WITH TEXAS STARS

Cedar Park, Texas – The Tucson Roadrunners opened the final weekend of their five-game road trip Friday night against the Texas Stars at the H-E-B Center. The game marked the third meeting on the season between Tucson and Texas, and fifth of 12 out of division matchups for the Roadrunners. The fast-paced, high-energy matchup ended with a 3-2 Texas victory, as the Dallas Stars AHL affiliate took the final lead of the contest with just 2:25 on the clock in the third period. The goals for Tucson were scored by Cam Crotty and Cam Hebig, while goaltender Ivan Prosvetov recorded 33 saves for the most in three outings against Texas this season.

Watch Tucson Roadrunners forward Cameron Hebig net his 11th goal of the season in the second period of Friday’s matchup with the Texas Stars, matching a career high. The goal came while on Tucson’s first power-play of the contest and evened the score at 2-2. Hebig is one of four active Roadrunners with at least three power-play goals.

A CREW OF CAMS – The Tucson Roadrunners had six players record a point in Friday’s meeting with the Texas Stars, with half of those players named Cam. It began just 4:37 into the contest, when defenseman Cam Crotty netted his second goal of the season to give Tucson a 1-0 lead. Forward Cam Hebig followed suit with a power-play strike 3:31 into the second period to tie the game at 2-2. Defenseman Cam Dineen assisted on the Hebig goal for his 16th of the season, leading Tucson blue-liners.

Tucson Roadrunners forward Ben McCartney returned to Texas for the first time since May 2021, when he made his American Hockey League debut against the Stars. McCartney notched a goal and an assist at the H-E-B Center in Cedar Park on May 8, 2021. The 21-year-old is one of four Roadrunners to score their first career AHL goal against Texas in the last two seasons.

“It was disappointing to lose that game, but everyone was positive on the bench. We were feeding off each other. It was unfortunate that bounces didn’t go our way tonight. The energy was good but it was unfortunate we couldn’t pull out a win.”

Roadrunners defenseman Cole Hults on the team’s attitude during Friday’s hard-fought battle with the Texas Stars.

Tucson grabbed the first goal of the game with a blast from the point by Cam Crotty. The score was Crotty’s second of the season and assisted by Jan Jenik and Terry Broadhurst for Jenik’s 20th assist of the year. The 21-year-old is the active team leader for total assists and the third Roadrunner to reach 35 total points on the season. The goal came with just 4:37 gone by in the first period and was the only score of the frame. Neither team went on a power-play in the opening frame, but the teams skated four-on-four in the final three minutes after roughing penalties on Tucson’s Tyson Empey and former Roadrunner Jeremy Gregoire. The Stars quickly went to work in the second period, scoring twice in the first 1:28 to take their first lead of the night at 2-1. The Roadrunners took a timeout and answered back less than two minutes later on their first man-advantage of the game, tying the game at 2-2. Mike Carcone sent a shot in toward the net which was deflected in by Cameron Hebig for his 11th tally of the season. After the equalizing goal by Hebig, the teams went back to the physical game for the remainder of the middle frame. Tucson and Texas traded both hits and power-plays but were still knotted at two at the end of the second period. The Roadrunners and Stars continued to battle back and forth at both ends of the ice with few stoppages. Eventually, it was Texas that broke the 2-2 tie with just 2:25 still to play in regulation. The goal by Ty Dellandrea for his second of the game snapped a stretch of nearly 35 minutes without a score by either team. With time winding down in the third period, Tucson was unable to pull goaltender Ivan Prosvetov for an extra attacker, as the Stars came away with a 3-2 win in the series opener.

The Roadrunners will be back at it Saturday night against the Stars to wrap up the five-game road trip. The series finale in Texas is scheduled for 6:00 p.m. MST, with coverage beginning at 5:45 p.m. MST on Fox Sports 1450AM with Roadrunners Warm-Up hosted by Jimmy Peebles. Then, “Voice of the Roadrunners” Adrian Denny will have all the action live from the H-E-B Center at Cedar Park.