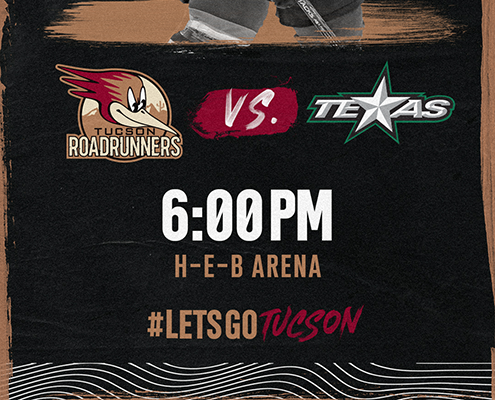 The Tucson Roadrunners enter the final weekend of their five-game road trip Friday night with the first of two games with the Texas Stars. The Roadrunners are back in the Lone Star State for the first time since May 2021, when they took on the Stars for their final three road games of the 2020-2021 season. The season series between Tucson and Texas is currently even at 1-1 after a pair of games at the Tucson Arena October 23 and 24. The 138 days since the Roadrunners last game with the Texas Stars on October 24 and Friday’s contest is the largest single-season gap between games against a team since the 2017-2018 season. After the weekend series with Texas, 11 of the final 19 games for Tucson will be on their home ice.

Three Things
1) The Roadrunners and Stars have produced some exciting games over the years, beginning in the 2018 Calder Cup Playoffs. Tucson and Texas met in the Second Round, with the Roadrunners hosting their first-ever second round playoff games at the Tucson Arena. Game one of the series saw the Roadrunners come away with a 2-1 overtime victory, the first of three games in the series to go to overtime. The Roadrunners opened the 2019-2020 season with a 2-0 win over Texas, as netminder Antti Raanta posted a 19-save shutout on a conditioning assignment with Tucson. Goaltender Ivan Prosvetov matched the feat this season, when stopped all 19 shots faced for his second-straight shutout to open the year. Tucson’s 4-0 win over the Stars on October 23 was fueled by Ben McCartney’s first career AHL hat trick. Four of McCartney’s first six appearances with Tucson were against the Stars, including his American Hockey League debut on May 8, 2021, when he recorded his first professional goal and an assist in Texas. In the same game, fellow rookie Ty Emberson netted his first pro goal. Both goals were assisted by Ryan McGregor in the fourth multiple-point performance of his rookie season.

2) The Roadrunners power-play has been effective against the Stars while in Texas over the past few seasons. Tucson has netted nine power-play goals in their last eight contests at the H-E-B Center dating back to February 9, 2018. The Roadrunners enter the series with Texas boasting the third-highest road power-play percentage in the division (20.5%), while Texas currently has the second-lowest penalty-kill percentage in the AHL Central Division (78.5%). The Texas Stars are one of three out of division teams the Roadrunners play this year, all coming from the AHL’s Central Division. The Roadrunners are 2-2 in out of division contests so far this season, with series splits against the Stars and Wild. After 35 consecutive games against Pacific Division opponents, eight of the next 14 matchups for Tucson will be against out of division teams. The stretch will start with two-game sets at home against Rockford and Iowa, followed by a final two-game series with the Ice Hogs on the road.

3) Joining the Roadrunners roster ahead of the weekend series in Texas is forward Mitchell Lewandowski. The 23-year-old spent the last five seasons at Michigan State University, where he tallied 120 points (56g 64a) in 156 total games played. In the 2020-2021 season, Lewandowski led Michigan State with 13 points (6g 7a) and was tied for the team lead in goals. His first appearance with Tucson will mark his American Hockey League debut. The move comes after Roadrunners Captain Hudson Fasching was recalled to Arizona Coyotes on Monday. In addition, defenseman Quinn Wichers was returned to the Rapid City Rush and forward Zack Andrusiak was released from PTO back to the Cincinnati Cyclones.

“It was good to get home. The ability to come home, regroup, get a fresh set of clothes. A couple of practices here for time in our teaching environment, and then we’re back on the road.”

Roadrunners Head Coach Jay Varady on the ability to practice at home during Tucson’s current five-game road trip. The Roadrunners returned to Tucson for a pair of midweek practices before heading back on the road to face Texas.

Number to Know
7 – The number of successful penalty-kills by the Roadrunners in their win against the Texas Stars on October 23, 2021. Tucson went a perfect 7/7 in the Home Opener and is 17 for 19 overall on the PK this season in out of division matchups. More recently, the Roadrunners have not allowed a power-play goal in three of their last four games, including two meetings with the Pacific Division’s best power-play in the Ontario Reign.

We’re Doing It Live
Tonight’s game will be broadcast on AHLtv, which is free tonight only by creating an account at AHLtv.com as well as on the radio on Fox Sports 1450AM or on the iHeartRadio app. Coverage begins at 5:45 p.m. MST with Roadrunners Warm-Up, as Jimmy Peebles gets you ready for the game before “Voice of the Roadrunners” Adrian Denny has the call at 6:00 p.m. live from the H-E-B Center.