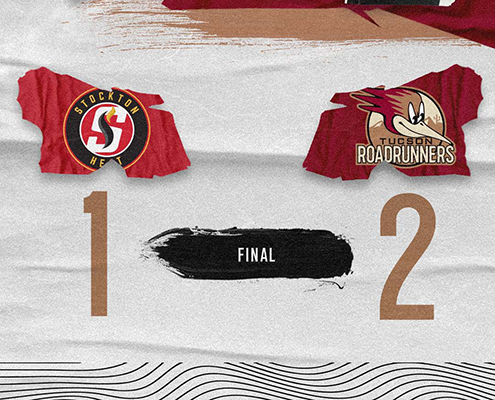 Tucson, Arizona – The Tucson Roadrunners played their first game since the holiday break Tuesday night at the Tucson Arena, toppling the first-place Stockton Heat by a score of 2-1. The win marked the Roadrunners third win in five games over the Calgary Flames AHL affiliate on the season, and the first to be accomplished in regulation. Ivan Prosvetov started in net for the Roadrunners and stopped 30 shots on goal, while Stockton netminder Dustin Wolf suffered his first regulation loss of the 2021-2022 campaign to fall to a 15-1-2 record on the season.

The Roadrunners went on their first power-play of the night just 31 seconds into the opening frame and used it to take an early 1-0 lead. Defenseman Victor Soderstrom had the score for his second goal of the season, both of which coming against the Stockton Heat. The Heat had some chances in first to even up the score, but Tucson netminder Ivan Prosvetov turned everything aside to keep the Roadrunners in the lead as the teams entered the first intermission. Shots on goal were even in the first period, with each team firing ten pucks on the opposing goaltender. After Tucson scored the first goal of the game just 1:29 into the opening period, the next goal came with 4:37 gone by in the middle frame, scored for the Heat by Justin Kirkland. The goal tied the game up at one goal apiece and came while the teams were skating four-on-four with Mike Carcone and Alex Gallant in the box for roughing. Shortly after the Stockton goal, Roadrunners forward Ben McCartney dropped the gloves with Glenn Gawdin, and the two were each awarded five minutes for fighting. Tucson warded off Stockton’s second power-play of the contest at the midway point of the period to keep the Heat scoreless on the power-play and the score tied at one. Offsetting penalties for the Roadrunners and Heat meant another four-on-four situation, but the score remained even at one goal apiece after the two minutes had passed. A late cross-checking penalty on Jan Jenik led to the Roadrunners ending the second period on the penalty-kill with 23 seconds of it carrying over into the final frame. Tucson controlled the puck as the leftover penalty-kill wound down but were still looking for a goal to retake the lead in the final 20 minutes of regulation. That goal came with 6:44 gone by in the final frame, as Jan Jenik took advantage of the team’s first power-play of the period with his second power-play strike of the season. The goal put Tucson back on top 2-1 with time ticking away in the third period. The Roadrunners clamped down on defense for the final 13:16 of regulation and held on for the 2-1 victory to open 2022.

The Roadrunners will continue their midweek series with the Stockton Heat Wednesday night back at the Tucson Arena with a chance to sweep. The game is slated to start at 6:30 p.m. MST, with coverage beginning at 6:15 on Fox Sports 1450AM with Roadrunners Warm-Up hosted by Jimmy Peebles. Then, “Voice of the Roadrunners” Adrian Denny will have all the action live from the Tucson Arena.

“When we play to our identity and play the way we want to, we can beat anyone. Obviously [Stockton] is a strong team, but don’t underestimate the Roadrunners.”

Roadrunners forward Jan Jenik on the strength of the Roadrunners and the team’s ability to take down top teams like the Stockton Heat.

SHORT WAIT AFTER THE BREAK – The Roadrunners set a season-best for fastest goal to open a game Tuesday evening against the Stockton Heat, when Victor Soderstrom capitalized on Tucson’s first power-play of the night with his second goal of the season 1:29 into the first period.

Watch Tucson Roadrunners forward Jan Jenik net the eventual game-winner against the Stockton Heat Tuesday night at the Tucson Arena. The goal was the Roadrunners second power-play score of the night, as well as Jenik’s second goal of the season while on the man advantage.

Tucson Roadrunners forward Ben McCartney drops the gloves with Stockton Heat forward Glenn Gawdin in the second of Tuesday night’s 2-1 Roadrunners win at the Tucson Arena. The bout marked McCartney’s second fight of the season, and the 20-year-old tallied an assist in the contest.