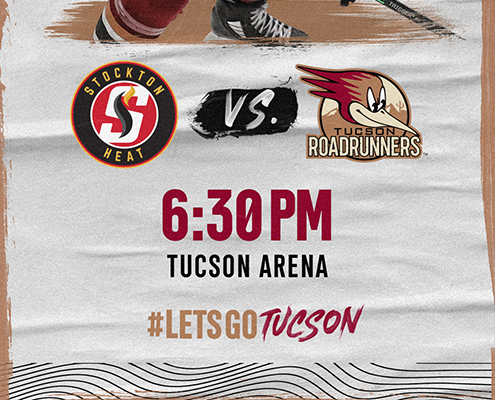 The Tucson Roadrunners are back at the Tucson Arena Wednesday night, as they’ll take on the Stockton Heat with a chance to sweep the two-game, midweek series against the AHL’s Pacific Division leader. The Roadrunners won the first game of the series Tuesday night by a score of 2-1, as they handed December’s AHL Goaltender of the Month Dustin Wolf his first regulation loss of the season.

Three Things
1) Tucson won the first game of the series in large part due to their special teams. Both of the Roadrunners goals were scored on the power-play by second-year skaters Victor Soderstrom and Jan Jenik. Soderstrom’s goal marked the defenseman’s second score of the season, both against the Stockton Heat. Jenik’s goal, which proved to be the eventual game-winner, was his fifth of the season and second while on the man advantage. On the other side of the ice, Tucson was a perfect four-for-four on the penalty-kill, marking the second-straight contest without a power-play goal allowed.

2) Ivan Prosvetov had another solid performance in net Tuesday night for the Roadrunners, recording 30 saves and allowing only one goal for his eighth victory of the season. Prosvetov now has a 3-1 record against the Stockton Heat, with one win coming by way of an overtime shutout, another coming with a career-high in saves with 47, and Tuesday night without a five-on-five goal allowed for the second time in four games against the Calgary Flames AHL affiliate. Prosvetov was named the third star of the night for the performance.

3) Scoring the goals for the Roadrunners in their 2-1 victory Tuesday night were Victor Soderstrom and Jan Jenik. Each of the second-year skaters recorded a goal and an assist in the contest for Jenik’s third and Soderstrom’s fourth multiple-point performances of the season. Both players have been on hot streaks as of late, with Soderstrom tallying a point in three of his last four games with Tucson, and three multi-point nights in his last six appearances. Jenik has recorded a point in six of his last seven contests with the team, and hasn’t gone two-straight games without a point since November 5 and 6.

“I think we have some guys that can play in tight situations. As a group we have to be comfortable with a quiet game. We have to be able to go out there and play a steady game where not much is happening shift-to-shift, but we have to be ready to strike in those key moments.”

Number to Know
89 – The number of seconds into Tuesday night’s contest against the Stockton Heat before Roadrunners defenseman Victor Soderstrom scored the first goal of the evening on the power-play. The goal marked the fastest score by the Roadrunners to start a contest this season and was the only goal in the game for the first 24:36 of action.

We’re Doing It Live
Tonight’s game will be broadcast on AHLtv, as well as on the radio on Fox Sports 1450AM, or on the iHeartRadio app. Coverage begins at 6:15 p.m. MST with Roadrunners Warm-Up, as Jimmy Peebles gets you ready for the game before “Voice of the Roadrunners” Adrian Denny has the call at 6:30 p.m. live from the Tucson Arena.