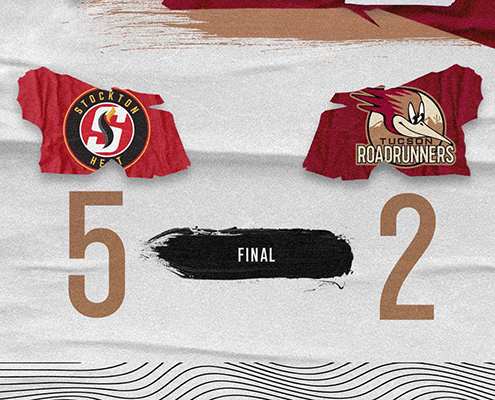 Tucson, Arizona – The Tucson Roadrunners wrapped up their midweek series with the Stockton Heat Wednesday night at the Tucson Arena, falling to the AHL’s Pacific Division leaders by a score of 5-2. The Roadrunners had goals from starting forwards Mike Carcone and Terry Broadhurst but split their third-consecutive series with the Calgary Flames AHL affiliate.

After the Roadrunners took an early 1-0 lead just 1:29 into Tuesday night’s matchup, the Heat answered back with the first goal of Wednesday’s contest just 54 seconds into the opening frame to take their first lead of the midweek series. The next goal of the evening wouldn’t come until the final 4:27 of the first period, when the Heat were awarded a penalty shot and used it to extend their lead to 2-0. The goal marked the first penalty shot in a Roadrunners game this season and came shortly after the Heat’s first and only power-play of the opening 20 minutes. The power-play came at the same time as Tucson forward Hudson Elynuik dropped the gloves with Heat winger Eetu Tuulola for his second fight of the season. Stockton came back out in the middle period and extended their lead to three with a goal by Greg Moro, his first of the year. Tucson answered back less than two and a half minutes later with their first goal of the night, scored by forward Terry Broadhurst for his third goal of the season. The Heat answered back four and a half minutes later with a shorthanded strike near the midway point of the second period, extending Stockton’s lead to 4-1. The Roadrunners were able to get one back in the final 2:42 of the middle frame, when Mike Carcone sniped the puck past Stockton netminder Adam Werner for his sixth goal of the season. Tucson held the momentum going into the final 20 minutes of regulation with some good offensive sequences to close out the second, but still trailed by a pair of goals. The Roadrunners saw some chances both on the power-play and on the rush but couldn’t get the bounce they needed late in the contest. An empty-net goal by Stockton put the game away for good, with the Heat getting the win by a score of 5-2 and splitting the two-game series with the Roadrunners for the third-straight time this season.

The Roadrunners will continue their four-game home stand Saturday and Sunday with a pair of contests against the Colorado Eagles. Saturday’s game faces off at 7 p.m. MST, with coverage beginning at 6:15 on Fox Sports 1450AM with Roadrunners Warm-Up hosted by Jimmy Peebles. Then, “Voice of the Roadrunners” Adrian Denny will have all the action live from the Tucson Arena.

“It’s hockey season now. Play, day off, play, day off, then get ready for a new series. It’s exciting, it’s what these guys want to do. We’ve had a lot of practices early in the season, now it’s time to play. I think it’s about finding our rhythm as we go through that.”

Roadrunners Head Coach Jay Varady on the quick turnaround to the team’s next series this weekend with the Colorado Eagles, followed by an extended road trip shortly after.

Watch Tucson Roadrunners forward Mike Carcone rifle the puck past Stockton Heat goaltender Adam Werner for his sixth goal of the season in the second period of Wednesday night’s matchup. The goal brought the Roadrunners to within two of the Heat and marked Carcone’s first score since his NHL debut with the Arizona Coyotes on December 28.

Tucson Roadrunners defenseman Vlad Kolyachonok handles the puck in Wednesday night’s matchup against the Stockton Heat. The 20-year-old has appeared in four games this season against the Heat, including when he scored the overtime game-winner back on October 15 in the Roadrunners season opener on the road in Stockton. (Photo Credits: Chris Hook)

Packed Weekend On Tap At Tucson Arena
Scroll to top