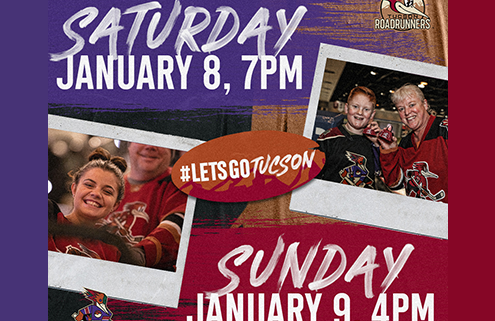 TUCSON, ARIZONA – The Tucson Roadrunners, owned and operated by the Arizona Coyotes, have a packed weekend planned as they host the Colorado Eagles Saturday at 7 p.m. and Sunday at 4 p.m.

Saturday, the Roadrunners will be wearing their 5th Anniversary jerseys that are available to purchase by online auction or raffle through Saturday at 10 p.m. at TucsonRoadrunners.com/5th. All proceeds will go to Roadrunners Give Back, a branch of the Arizona Coyotes Foundation and Intermountain Centers who provides educational and therapeutic support here in Tucson to children, adolescents and adults.

At 5 p.m. Saturday, the festivities begin with Whiskey and Wings. For $45, Whiskey & Wings includes: sampling from some favorite local wing restaurants, a commemorative Roadrunners tasting glass, access to purchase discounted whiskey tastings and a Center Ice ticket to the game. Fans will also have the ability to vote for their favorite wing vendor. Whiskey & Wings is available at TucsonRoadrunners.com/Wings

Saturday’s game will also be broadcast live in Tucson on The CW Tucson.

Sunday at 4 p.m., the Roadrunners will celebrate the start of the upcoming Winter Games by welcoming local Southern Arizona favorites who have competed or coached in past Olympics including:

Shane Doan, a 2016 Olympian in Ice Hockey and the Arizona Coyotes Chief Hockey Officer will welcome the fans to the game on the video board. Select participants will also sign autographs during the First Intermission.

The Roadrunners are offering a Special Winter Games Kickoff Ticket Package that is available at TucsonRoadrunners.com/Winter. It includes four tickets and $20 in Concessions Vouchers.