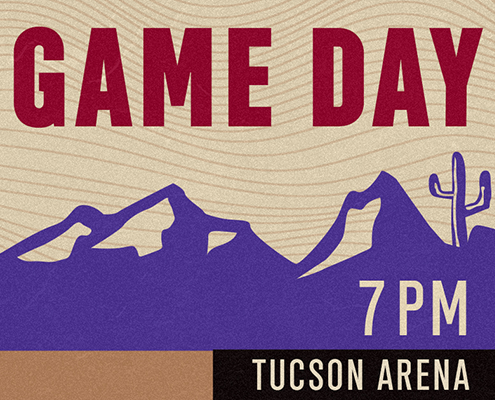 The Tucson Roadrunners welcome the Colorado Eagles to the Tucson Arena Saturday night, for the first of two weekend matchups with the Avalanche AHL affiliate. Saturday marks the Eagles first trip to the Old Pueblo this season, and first since April of last season. The pair of games Saturday and Sunday will conclude the Roadrunners four-game home stand to open the 2022 calendar year.

Three Things
1) Tucson enters the weekend with Colorado fresh off a series split with the first-place Stockton Heat. The Roadrunners took the first game of the pair by a score of 2-1, but Stockton answered back the following night with a 5-2 win. A key takeaway from the series for the Roadrunners was the performance of their special-teams units. Tucson’s penalty-kill was a perfect eight-for-eight in fending off the Stockton power-play, and both goals scored in Tuesday’s victory came while on the man advantage. The effectiveness of the Roadrunners penalty-kill will be important for the series with the Eagles, as Colorado has the AHL Pacific Division’s second-best power-play percentage on the road this season (20%).

2) Scoring the pair of power-play goals in Tuesday’s matchup were second-year skaters Victor Soderstrom and Jan Jenik. Jenik has averaged a point-per-game over his last eight showings with the team, while Soderstrom has nine points over his previous ten appearances. The two each made their NHL debuts with the Arizona Coyotes last season and have combined for 12 games at the NHL level this year. The 21-year-old Jenik most recently appeared with the Coyotes on December 28, when he got into his first career NHL fight against Jonah Gadjovich of the San Jose Sharks.

3) The Roadrunners enter the weekend series with a 7-4-1 record in their last 12 contests dating back to November 21. Meanwhile, the Eagles fly into Tucson on a three-game point streak (2-0-1-0) and a 5-3-2-0 record in their last ten outings. The Roadrunners and Eagles faced off previously this season in a pair of games at the Budweiser Events Center in Loveland, Colorado to open the month of December. The series was split at one win apiece, with each victorious team scoring four goals. Tucson took the first game of the weekend with a 4-1 win, backed by a pair of goals from Hudson Elynuik, and back-to-back power-play strikes from JJ Moser and Ben McCartney in the first period. Roadrunners goaltender Ivan Prosvetov was perfect through the first 56:26 of the contest and finished the night with 31 saves.

What’s The Word?
Tucson Roadrunners forward Michael Carcone on the quick turnaround between the end of their last series with the Stockton Heat on Wednesday, and the start of their weekend series with the Colorado Eagles Saturday night:

“Obviously we can’t skate that much [between games], so we just have to address things a team, go over some video, and get back to it. Go into [the weekend] and try to get those points.”

We’re Doing It Live
Tonight’s game will be broadcast on AHLtv and in Southern Arizona on the CW Tucson, as well as on the radio on Fox Sports 1450AM, or on the iHeartRadio app. Coverage begins at 6:45 p.m. MST with Roadrunners Warm-Up, as Jimmy Peebles gets you ready for the game before “Voice of the Roadrunners” Adrian Denny has the call at 7:00 p.m. live from the Tucson Arena.