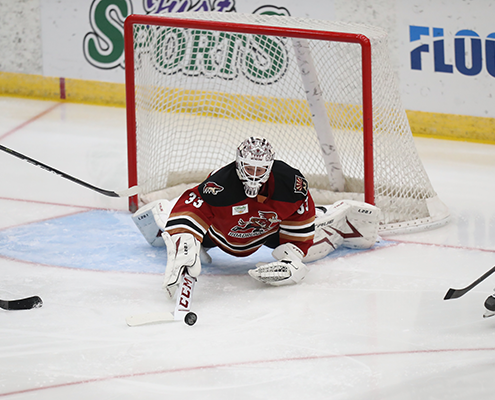 Tucson, Arizona – The Tucson Roadrunners continued their first official home series of the 2021 season Friday night against the Texas Stars. Texas scored five goals in a row to earn their second win in as many games against Tucson, by a score of 5-2.

Tucson struck first in Friday’s contest, as Ryan McGregor earned his first professional goal, thanks to some solid defense by linemate Nate Sucese on a Texas Stars rush. Texas would answer back quickly with a pair of goals nineteen seconds apart to take a 2-1 lead midway through the first period. Texas added a power-play score late in the period to give them a 3-1 lead heading into the first intermission. Despite a period that saw five total power-plays between the two teams, including a minute of five-on-three action in the Stars favor, there were no goals scored in the second period. Texas wasted no time adding to their lead in the third period, as they tallied their fourth goal of the contest thirty seconds into the frame. In the waning moments of the third period, Texas and Tucson traded goals, giving Kevin Roy his team leading sixth score of the season, but the Texas lead remained at three. Tucson would have a brief six-on-three opportunity at the end of the game thanks to an empty net and a pair of Texas penalties, but couldn’t capitalize. The final score was 5-2 in Texas’ favor. Adin Hill, down in Tucson from the Arizona Coyotes on a conditioning assignment, made his first start for the Roadrunners since March 11 of 2020. He made 31 saves for Tucson Friday night.

The Roadrunners wrap up their three-game series with the Texas Stars Saturday night at 7:00pm MST. You can see the contest on The CW Tucson, listen to the game on Tucson on FOX 1450 AM and on the iHeart Radio app or also the game on AHL TV.

“We got into some tough penalty trouble early in the game, and that hurt us. I admire that our guys don’t stop, but the bottom line is we have to stay out of the box.”

GIVING IT THEIR BEST SHOTS – The Tucson Roadrunners set a new franchise record for most shots on goal in a single period Friday night against Texas, when they uncorked 26 shots during the third period, including Kevin Roy’s team-leading sixth goal of the season.

Tucson Roadrunners forward Ryan McGregor recorded his first professional goal during the first period Friday night versus the Texas Stars. He has appeared in all nine games with the Roadrunners this season, after signing a contract with the Arizona Coyotes in March of 2020.

Goaltender Adin Hill donned the Tucson Roadrunners uniform for the first time since March 11, 2020 Friday night. Hill is down from the Arizona Coyotes roster on a conditioning assignment. He made 31 saves in Friday night’s matchup with the Texas Stars.